The New Brunswick Bikeway – Much more than bike lanes

Last week at the November Middlesex County Transportation Coordinating Committee Meeting it was announced that the New Brunswick Bikeway was in final engineering design and that the project was or would soon be put out to bid. The project would build 1.9 miles of bike lanes from the intersection of Lafayette St and College Ave near the Route 18 John Lynch Bridge at its western terminus, to George Street and Bishop Street at the edge of the Douglas Campus to the east. From Lafayette Street, the bikeway would run on College Ave to Huntington St, then down George St to Albany St (NJ Rt 27). At Albany there would be a spur that will run south to the train station while the main route would head north to Neilson St. Then the bikeway would head east along the entire length of Neilson St to Bishop St were it will turn right for a few hundred feet back to George St. 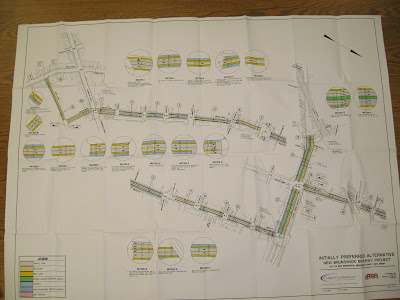 Overview diagram of the eastern portion of the New Brunswick Bikeway.
Access to diagrams and report courtesy of the Middlesex County Planning Department.
As part of the construction of the bikeway, every street the project impacts will be repaved, intersections will be updated to comply with ADA standards, traffic signals will be redesign and retimed with new hardware if necessary, the median along Albany street will be narrowed and realigned in places, and bicycle racks will be installed in select locations. As this project does much more than simply paint lines on the roadway, $7.1 million has been allocated to fund the construction of the project. 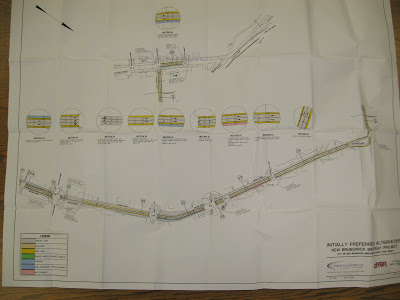 Overview diagram of the western portion of the New Brunswick Bikeway.
Access to diagrams and report courtesy of the Middlesex County Planning Department.

While this blog has been critical of this project in the past, having looked at the final layout and gaining a better understand what the project entails, makes us feel more comfortable with what the project will give New Brunswick cyclists. While the project regrettably still reroutes cyclists away from the core of New Brunswick’s downtown, it does contain much that will benefit cyclists. The bike lanes along Albany St from Neilson to the train station will aid those living Highland Park reach the station. The bike lane along the length of George St west of Albany is a perfect route for cyclists between parts of the College Ave Campus and downtown. And while Neilson St might not be the most ideal route for cyclists traveling between the College Ave and Cook/Douglas Campuses, the bike lanes along this street will make it easier for cyclists coming from Highland Park to get to the Cook/Douglas Campus as well as some destinations downtown. 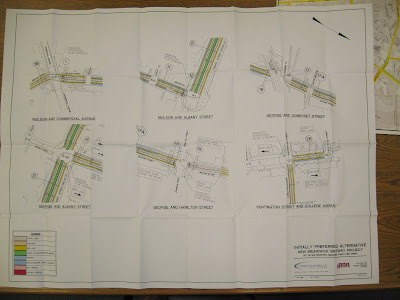 Detail diagram of the major intersections along the New Brunswick Bikeway.
Access to diagrams and report courtesy of the Middlesex County Planning Department.