Pedestrian Safety Editorial in the Press of Atlantic City

Pedestrian safety / Dangerous confusion
People die in wars. They die of illness and old age. They die violently and all too routinely in the nation's drug-plagued big cities.
But 21-year-old college students aren't supposed to die on late summer afternoons in Ocean City while walking across a street on their way to a waitress job on the Boardwalk.
That's what happened to Casey Feldman, a Fordham University student from southeastern Pennsylvania who was struck by a van and killed July 17 at Central Avenue and 14th Street - a four-way intersection with stop signs at each corner.
Feldman's tragic death is now one more sad statistic in a troubling trend - 86 pedestrians were struck and killed in New Jersey in the first half of 2009, an increase of 30 percent.
Police say Anthony Lomonaco, 58, of Middle Township, came to a full stop at the intersection but didn't see Feldman in the far crosswalk. He was charged with careless driving and failing to yield to a pedestrian.
Traffic experts aren't sure why pedestrian deaths are up. We don't know why either. But we do know this: New Jersey's law requiring cars to yield to pedestrians in crosswalks - and the sharply increased enforcement of that law in some towns, but not others, in recent years - has created a tremendous amount of dangerous confusion. And maybe that has something to do with the increase in pedestrian deaths. No one - driver or pedestrian - is completely sure anymore what the other is going to do.
The law says motorists must yield to any pedestrian who is "within" a crosswalk, marked or unmarked (unless the intersection is controlled by a traffic signal). But pedestrians can't count on motorists in all lanes knowing the law; one might stop, but will the others? Motorists who do stop can't count on the driver behind them stopping; do the right thing, and you can end up getting rear-ended.
And all the painted crosswalks and signs telling pedestrians they have the right of way are giving them a false sense of security.
Furthering the confusion is that some towns enforce the law more stringently than others, and some towns enforce the law more stringently in some parts of their municipalities than in others. The whole situation is absurd - and dangerous. Traffic safety is about predictability, about knowing what the other guy is going to do. But this has turned intersections into free-for-alls.
We understand that pedestrians have as much right to the road as vehicles. And motorists are the ones inside a ton or two of steel capable of killing a person. The cars should yield. But pedestrians need to remember that they might not.
The law says pedestrians still have an obligation to exercise due care for safety. In the wake of Feldman's death, Ocean City Police Lt. Steven Ang sensibly urged pedestrians to make eye contact with drivers. The real answer, however, is for state lawmakers and traffic-safety officials to rethink the issues of pedestrian safety and pedestrian rights in New Jersey.
Posted in Editorials on Sunday, July 26, 2009 3:10 am Updated: 2:42 pm.
Email ThisBlogThis!Share to TwitterShare to FacebookShare to Pinterest
Posted by John Boyle at 3:48 PM 5 comments:

Bike to All Points West Festival at Liberty State Park

Not the most important topic I could be blogging about at the moment but I thought this was pretty cool and worthy of a mention. 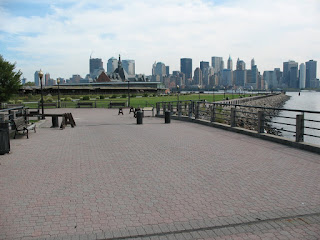 The All Points West Music and Arts Festival is advertising that they will have bicycle parking available at the festival and are encouraging people to arrive be bike. From their webpage:

It's now easier than ever to walk, roll or ride from the Jersey City/Hoboken area to Liberty State Park! You can drive or ride the Light Rail, too, but the most scenic route is along the Hudson River Waterfront Walkway. Biking along this route leads you past many landmarks, such as the LeFrak lighthouse, Marina Park, and the old Hudson & Manhattan Railroad Powerhouse.

There will be bike racks at the main festival gate; all you need to do is bring your own lock!

Hopefully they'll have more than this but I'm confident they will since they barely mention driving to the festival. It's the last means to get there that they mention on their website. 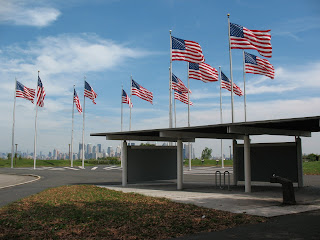 Do you know why its called "All Points West?"
Email ThisBlogThis!Share to TwitterShare to FacebookShare to Pinterest
Posted by Andrew J. Besold at 6:48 PM 3 comments:

Monmouth County is edging towards becoming a bicycle tourism Mecca. Just three small gaps need to closed to create a nearly continuous trail from Freehold to the northern tip of Sandy Hook, much of it offering views of the seascape and the bay shore. The two segments in Highlands and Atlantic Highlands will place bikes on low traffic streets.

The Route 36 Bridge which should be complete by early 2011 will feature a fly over bike/ped bridge that will connect directly from the Bridge to the Sandy Hook and Sea Bright multi-use paths.

Following the beach road and/or local boardwalks you can ride to Manasquan and connect to the Edgar Felix Bike Path over the Garden State Parkway to historic Allaire Village. Experienced cyclists could then pick their best route back to Freehold to complete a full circle. In the distant future the Capital to Coast Trail would connect the Edgar Felix path to the East Coast Greenway in Trenton. Transit connections are fairly good with ferry service and train service to Manhattan and could be improved even more with bike racks on buses.

Bob Lucky has a fantastic bike photo tour of the loosely connected routes in Monmouth County. Hopefully the County will fully harness this potential regional attractor by adding signage and creating a route system.


View Monmouth Heritage Trail in a larger map
Email ThisBlogThis!Share to TwitterShare to FacebookShare to Pinterest
Posted by John Boyle at 9:55 PM 3 comments:

As reported in the Mobilizing the Region Blog Atlantic City's Regional Transportation Plan "trumps" sprawl over sustainability and virtually ignores bicycle and pedestrian improvements in a city where 40% of the households do not have access to a car.

Much of the plan calls for widening of major highways, new interchanges, the blowing out of intersections and local city streets as well as the addition of even more parking garages. The total for these improvements is an eye opening $3.7 Billion Dollars.

The $23 Million Dollar proposal for bikeway on the boardwalk can't be more than a joke and the report even acknowledges the shortcoming of bike planning in the City. The lack of designated bicycle routes, lanes, or trails anywhere in the City suggests that safety for bicyclists and other slow speed vehicle users has not been given sufficient consideration.

Time to go back to the drawing board and come back with an environmentally just and sustainable plan that envisions a livable Atlantic City. Perhaps the planners should take a look at the cities rich past for some clues.
Email ThisBlogThis!Share to TwitterShare to FacebookShare to Pinterest
Posted by John Boyle at 11:21 PM 2 comments: