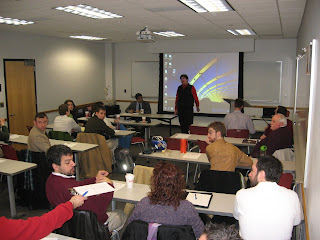 On Wednesday, December 15th NJ DOT with the Voorhees Transportation Center hosted the latest New Jersey Bicycle Pedestrian Advisory Council (NJ BPAC) meeting.
For those of you that don’t know, ever 3 months state, county, and local government officials, consultants as well as advocates and members of the general public come together at the Bloustein School at Rutgers University for the NJ BPAC meeting. Here the latest happenings and other news concerning bicycle and pedestrian are discussed and shared. All are welcomed.

Items discussed and announcements include:

The feature presentation at this BPAC meeting was given by Ian Sacs, the Director of Transportation and Parking for the City of Hoboken. If you are regular reader of WalkBikeJersey you are already aware of some of the innovative (Ed - if less than ideally executed) bicycle and pedestrian amenities found in Hoboken. Most of what Ian talked about in his presentation on this day however was more on how he, with the backing of the City Council, has been creating incentives for residents to leave their cars at home or to get rid of them all together and not so much on the finer details of Hoboken’s bicycle and pedestrian amenities.

Ian comes from an engineering background and calls himself a transportation engineer, not a traffic engineer and this is evident in the way that he approaches transportation and traffic problems in Hoboken. For many decades prior to his arrival, the only proactive approach to transportation and parking that the city undertook was to accommodate cars by increasing to supply of parking through the construction of expensive parking garages. Instead of continuing down this ever more costly and futile path of an ever-increasing parking supply, Ian’s approach is that it is better and much cheaper to reduce parking demand.

Ian admits that much of what he has been able to accomplish in Hoboken is the direct result of how the city was planned and laid out many years ago, when walking and transit was the only way that people got around and commuted to work. The residual pedestrian friendly layout, dense urban residential infrastructure and transit amenities, new (Hudson-Bergen Light Rail) and old (NJ Transit’s Lackawana Terminal and PATH), has made it rather easy for him to get residents to leave their cars at home and in some cases get rid of them all together. The two new major initiatives that city has implemented with Ian’s guidance to reduce private motor vehicle mode share and parking demand has been the “HOP” bus shuttle and the new and highly visible car-share program called “Corner Cars.”

While Hoboken has great transit amenities to help take residents to destinations outside of the city, transit options to destinations within Hoboken were actually rather limited. The HOP Shuttle, with its three different routes servicing major destinations only in Hoboken looks to remedy this oversight and eliminate much of the need for expensive paratransit services that provides door-to-door transportation for the elderly and disabled. While the service has yet to break even financially (typical of transit BTW), Ian continues to find additional revenue streams and riders for the system, while expanding service, keeping regular fairs low and free for the cities elderly and poor.

Corner Cars is a much more innovative and controversial (at least for some in the city) approach to reducing parking demand and car ownership in the city. While Hoboken has long been a site of a successful car-share program, this new program brings to visibility of Hoboken car-share out onto the streets. Like the name implies, Corner Cars are literally parked in reserved spots on the streets at select and even spaced corners throughout Hoboken. What has made this program controversial to some has been the elimination on on-street parking spaces to make room for the Corner Cars. To help silence critics who lament the loss of “precious” parking spaces, the city has also implemented a program called “Surrender Your Permit” which provides additional financial initiatives for residents with a parking permit to get rid of it if they sign up to become a member of the Corner Cars program. So far around 50 people have done just that, which about makes up for the lost on-street parking taken by the Corner Cars (did not remember the exact numeric details but this is roughly correct).

Reducing traffic and parking demand does benefit those who wish to walk and bike by helping to tame the streets. A more direct way to help the city’s cyclist and pedestrians has been to simply enforce current parking regulations more strictly. Not only does this clear up the streets and increase city revenues but also eliminates illegal parking at street corners that often blocks a driver’s view of pedestrians crossing at the intersections along with cyclists and other vehicle traffic. A more proactive way to keep street corners clear has been to install flexible bollards to block people from parking in the last 25 feet before a crosswalk which he termed “corner daylighting.” However, even this does not stop 100% of illegal parking at these locations. 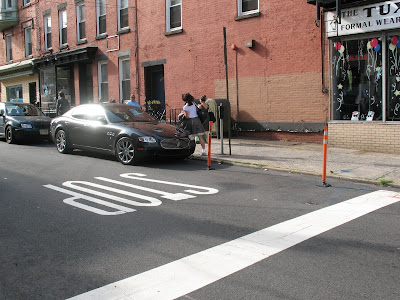 These bollards stop the driver of this $100,000+ Maserati from parking too close
to the curb but they aren't always enough to stop some drivers from parking illegally.
Finally Ian noted that the city’s efforts to make the streets more livable have increased the number of cyclists using a bike for simple local transportation. Scenes of bicycles with child carriers grocery baskets and fenders parked around the city are becoming evermore common. When asked by WalkBikeJersey about the parking at the train station he announced that the plan to develop the area around the train station would include what will probably be New Jersey’s first bicycle station.


That’s a rap on the December 2010 NJ BPAC rundown. Check back here to find out more when the next BPAC meeting likely scheduled for March 2011.
Email ThisBlogThis!Share to TwitterShare to FacebookShare to Pinterest
Posted by Andrew J. Besold at 8:01 PM