This crash report was first posted by our affiliates at the Bicycle Coalition of Greater Philadelphia.  Reading the comments in the Phillyburbs article linked to below, it appears that the bicyclist was using a flashlight (possibly handheld) as a headlight.  All should know that New Jersey State Law regarding operating a bicycle at night reads as follows:

According to Phillyburbs.com - 23 Year Old Shawn Patterson was riding his bicycle on Old Indian Mills Road in Tabernacle, NJ when he was hit by a truck making a left onto the road from Route 206 at around 10:55 p.m. Patterson was flown to the Trauma Center at Cooper University Hospital in Camden, where he succumbed to his injuries, police said.

As you can see the intersection of the road a vehicle traveling 50 mph on US 206 can almost seamlessly veer left onto the Old Indian Mills Rd.

Our deepest sympathies go out to Shawn's family and friends.
Email ThisBlogThis!Share to TwitterShare to FacebookShare to Pinterest
Posted by Andrew J. Besold at 11:53 PM No comments:

NJ Future just reported about how Jersey City and Ridgewood both passed Complete Streets policies recently.  Great news but NJ Future notes that this brings the total number of municipalities with Complete Streets policies up to 12 and counties (Monmouth) up to 1.  When you realize that New Jersey has 566 municipalities and 21 counties, you begin to see that there is a long way to go.

So step in Sustainable Jersey, supported by Shaping NJ (and a host of other organizations), which has scheduled three workshops on Complete Streets for local activists interested in pursuing the policy in their towns. Each workshop will highlight basic policy principles, potential resources and local case studies. The workshops will be held on:
And as NJ Future reported in their story about Jersey City and Ridgewood, NJDOT is encouraging towns to adopt their own Complete Streets policies by giving preferential consideration for municipal aid grants to towns that have adopted such policies.  To aid towns even further, NJDOT is also working developing standards for good Complete Street roadway designs for urban, suburban and rural settings.

So make sure you and/or one or more of your local town officials try to attend one of these seminars  and get your own Complete Streets policy in place.
Email ThisBlogThis!Share to TwitterShare to FacebookShare to Pinterest
Posted by Andrew J. Besold at 11:58 AM No comments:

Help Jersey City preserve and create its own High Line

The below comes from the Embankment Preservation Coalition in Jersey City.  For those of you that don't know, the  "Embankment" is the old Harsimus Stem Embankment which is an elevated stone structure that once carried seven tracks of the Pennsylvania Railroad to the Hudson River Waterfront.

Like the incredibly successful High Line across the Hudson in the once derelict Meatpacking District, the Embankment has the potential to completely transform and improve this part of Jersey City.  If allowed to be turned into a park, the Embankment would become a linchpin in a network of walkable, bikeable greenways within the City of Jersey City, and beyond.  The East Coast Greenway Alliance would even like to use the Embankment as the permanent, off-road route of the East Coast Greenway which would connect to the Meadowlands via the Bergen Arches to the west.

Now the message from the Embankment Preservation Coalition:

VOTE EMBANKMENT
Help the Embankment Preservation Coalition win up to $25,000 in the National Trust for Historic Preservation "This Place Matters" Community Challenge. The Trust selected us from 250 entrants to compete with 99 others in the challenge.
Now It's Up to You!

As of this weekend, we rank #10 out of 100 participants.
To bring a prize home, we need your vote!

Voting ends June 30.
Anyone with a valid email may vote.
You do not need to be a New Jersey resident.
Please vote and forward to Facebook, Twitter - help us Get out the Vote!
Email ThisBlogThis!Share to TwitterShare to FacebookShare to Pinterest
Posted by Andrew J. Besold at 1:18 AM 2 comments:

On June 3rd, The New York Times ran this nice article about the New Jersey Randonneurs.  Almost unknown to even the most knowledgeable bicycle enthusiast,  randonneuring can probably be best described as the ultra-marathoning of bicycle racing / riding.  Short rides start at 200km (124 miles), with long rides going up to 600km (372 miles)!  For most, the goal is simply finishing the ride within the allotted time window.  Only a select few look to win outright.  Obviously at these distances, rides last for many, many hours with the longer rides even going on for multiple days, usually with minimal breaks.  And as the Times article indicates, rides are not cancelled due to weather and bikes are usually fitted with fenders and are otherwise specially equipped. If this sounds like fun to you, well keep on reading.

This weekend also marks New Jersey's most famous long distance ride, The Longest Day.  Held yesterday June 11th (I thought it was next weekend), the name Longest Day ride is a double entendre.  The ride is held close to the Summer Solstice, the longest day of the year (on or around June 21) and the route connects the two most distant landmarks in the state.  At 208 miles, the ride starts on High Point in Sussex County and goes all the way to Cape May Light at the southern tip of the state.  This ride is considered the ultimate achievement for many New Jersey cyclists.

Well'p, there is always next year!  If you're looking to put this ultimate notch in your cycling belt, you can start with doing the New Jersey Gran Fondo at the end of August.  You should be able to prove that you are able to ride at least 100 miles before you register for the full length route of the Longest Day.
Email ThisBlogThis!Share to TwitterShare to FacebookShare to Pinterest
Posted by Andrew J. Besold at 12:57 PM No comments:

Federal funding for bike/ped and trail projects in jepordy

This just in from the League of American Bicyclists:

Email ThisBlogThis!Share to TwitterShare to FacebookShare to Pinterest
Posted by Andrew J. Besold at 4:23 PM No comments:

The concept study - The Ocean City Rail Trail & Bicycle Boulevard Project was unveiled to the public in late May. The study looked at the feasibility of extending the Haven Avenue bike boulevard OC1 to the south end of the Island and looked at different scenarios including placing a multi-use trail on an abandoned railbed in the wetlands area.
As expected the study showed that a trail along the railbed was possible but would require extensive permitting and wetland mitigation. This may pave the way for the City to examine several on-street bikeway options including the possibility of of installing a two way cycletrack on the west side of West Avenue and/or sharrows on Asbury Avenue with a boardwalk bikeway extending to the south end of the island at Corson's Inlet.
Full Article in the OC Sentinel

View Ocean City Proposed and Existing Routes in a larger map
Email ThisBlogThis!Share to TwitterShare to FacebookShare to Pinterest
Posted by John Boyle at 9:32 PM No comments:

The Delaware Valley Regional Planning Commission (DVRPC) is the Metropolitan Planning Organization for the Greater Philadelphia Region and and includes Burlington, Camden, Gloucester and Mercer Counties. They have opened the public comment period for the draft New Jersey Transportation Improvement Program (TIP) that will close at 5 p.m., July 5, 2011. The public comment period for the draft Transportation Conformity (with EPA Air Quality Standards) finding will open on June 21, 2011 and close at 5 p.m., July 20, 2011.

The TIP is the regionally agreed-upon list of priority transportation projects, as required by federal law. Transportation conformity is the process that ensures that plans and programs receiving federal aid are consistent with the region's air quality goals. All transportation projects that use federal money that has been allocated for the next 3 years is included in the TIP including bike/ped projects. The DVRPC NJ TIP is a subset of the NJDOT Capital Program

There will be a public meeting and information session on the Draft FY 2012 TIP for NJ and the Draft Transportation Conformity finding between the hours of 4 and 6 p.m. on:

View map in a larger window
You can click on the map markers to find out project details and submit comments. The 5 Bike/Ped projects included are colored blue.

Some things to note:
Email ThisBlogThis!Share to TwitterShare to FacebookShare to Pinterest
Posted by John Boyle at 1:11 PM No comments:

Time and place set for this Friday's Biergarten Bike Ride 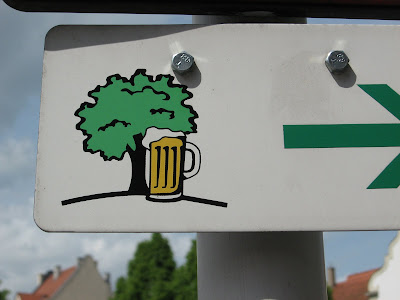 Email ThisBlogThis!Share to TwitterShare to FacebookShare to Pinterest
Posted by Andrew J. Besold at 4:03 PM 2 comments: