The New Jersey Bicycle Coalition has modified its name to the New Jersey Bike and Walk Coalition. This name change reflects the willingness of the board of directors to fully "embrace" the walking advocacy movement. We here at WalkBikeJersey wholehearted support the now NJBWC in their move to cover walking issues as well, for these three simple reasons:

1 - Those that identify themselves as "bicyclists" are unfortunately, still a small minority of roadway users.

2 - By comparison, everyone is a pedestrian at some part of their day so now the NJBWC can justifiably say they represent the needs of ALL New Jerseyans.

3 - Often walking and bicycle access issues are one and the same if not identical. By creating proper access for one group, often the needs of the other are taken care of as well.

We here at WalkBikeJersey think that NJBWC's move to incorporated pedestrian advocacy into their mission is a wise and effective move that is sure to create political dividends in the future.


Also, the NJBWC along with East Coast Greenway Alliance, Trenton Cycling Revolution and the West Windsor Bicycle and Pedestrian Alliance have announce a ride at 9:30 on Saturday August 14th celebrating cycling and walking in New Jersey by riding the recently completed and final section of the Delaware and Raritan Canal Towpath through Trenton. A good portion of New Jersey's congressional delegation has been invited so there is a good chance that you could be riding elbow to elbow with some of New Jersey's most important political leaders.

Billed as a "family ride," it begins at the Brearley House, located in Lawrenceville, NJ, on Meadow Road which is just off Princeton Pike and the Delaware and Raritan Canal Towpath. Traveling almost entirely "off-road" the ride will go 7 miles down into Trenton along the towpath, to the Washington Battle Monument and back. Lunch will be served afterward back at the Brearley House around noon so RSVP (info@njbike.org) if you would like to come.

More info about the event will be posted as soon as it becomes available online.
Email ThisBlogThis!Share to TwitterShare to FacebookShare to Pinterest
Posted by Andrew J. Besold at 2:31 PM 2 comments:

Ride With US (And Members of Congress?)

The New Jersey Bike & Walk Coalition (note the new name), along with the East Coast Greenway Alliance, the Trenton Cycling Revolution and the West Windsor Bicycle & Pedestrian Alliance are hosting a ride to celebrate the newly-constructed portion of the D&R Canal Path that completes the towpath/bikeway from New Brunswick, through Trenton and north along the Delaware River to Milford in Hunterdon County. A distance of 60 miles.

14 mile out and ride with members of Congress (Invited), state and local officials.

RSVP to info@njbike.org by August 7th, if you are interested in a complementary lunch. 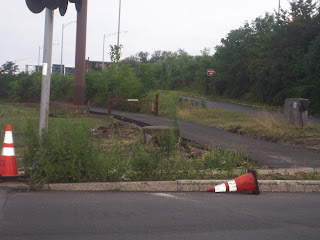 As of mid July the north end of the D&R canal connector trail at Mulberry St. in Trenton was freshly paved and waiting to be landscaped
Email ThisBlogThis!Share to TwitterShare to FacebookShare to Pinterest
Posted by John Boyle at 12:44 PM No comments:

Major progress for Complete Streets in New Jersey was made this pass week with a second municipality passing an ordinance along with New Jersey's first county to do so as well. While NJDOT lead the way passing its own Complete Streets Policy back in the winter, most of us know that it is the county and municipal streets where a vast amount (if not a majority) of walking and biking is done.

According to the West Windsor Bicycle and Pedestrian Alliance, West Windsor is now the 2nd New Jersey municipality after Montclair to pass a Complete Streets Resolution.

Monmouth County had on its July 22 agenda a Complete Streets resolution and reports are that it passed.

For those looking to make headway in your own local and county governments, links to all three resolutions are included for you to reference below.

Falls, they are the most common type of bicycle crash accounting for more than 50% of all crashes. The past month has seen an unusual spike of bike fatalities not involving motor vehicles


Yet NJ State Police which keeps an excellent online talley of traffic deaths has yet to record any of these fatal crashes in that database. In fact three of the four counties involved Bergen, Burlington and Hudson counties all show 0 pedalcycle deaths. The total number of pedalcycle deaths listed in the database stands at 7.

It's unclear if these fatalities will be included in the crash statistics, it may be that only bicycle crashes involving motor vehicles are counted. If that's the case then we are chronically underreporting bicycle fatalities. This is critical when it comes to highway safety funding as it is in theory supposed to be distributed by percentage of all crashes or fatalities. Things like pavement smoothness standards, repairing longitudal cracks and potholes, shoulder sweeping removing or improving steel plates covers can help reduce loss of control crashes.
Email ThisBlogThis!Share to TwitterShare to FacebookShare to Pinterest
Posted by John Boyle at 5:10 PM No comments:

The proposed bicycle component of Mercer County’s master plan will be discussed at an “open house” from 4 pm to 7 pm on Wednesday July 14 at the main branch of the Mercer County Library, Business Route 1 and Darrah Lane in Lawrence. This will give all those interested a chance to learn about this part of the master plan and how it could make the county safer for bicyclists as well as to offer comments on what is being developed.

Bicyclists have already been asked to provide input on the bikeability of roads in the county. A key step now is to define key links and intersections in need of improvement. By adding a bicycle element to the Mercer County Master Plan, it should help ensure that bicyclists are taken into account when road improvements are made.

Email ThisBlogThis!Share to TwitterShare to FacebookShare to Pinterest
Posted by John Boyle at 11:27 AM No comments:

Email ThisBlogThis!Share to TwitterShare to FacebookShare to Pinterest
Posted by John Boyle at 2:16 PM No comments:

The below report comes to us from John Boyle and our friends at the Bicycle Coalition of Greater Philadelphia:

Another cyclist has been struck down in the wide shoulder of a Gloucester County road, this time it's fatal. 70 Year Old Robert Schwinn of Vineland who as the report states was wearing a helmet and a reflective vest was struck in the shoulder.

"Schwinn, 70, was traveling northbound along the shoulder of Route 555 (Main Road) at 7:23 a.m., wearing a helmet and reflectorized vest. In the vicinity of Weymouth Road, a pick-up driven by Anthony Leatherwood, 32, of Franklinville, overtook Schwinn from behind and struck him, according to authorities."

Remarkably at this time there have been no charges have filed against the driver. The circumstances bear some similarities to several other crashes on the straight rural roads of South Jersey. Most recently On June 12th in West Deptford Randall Gartner suffered serious injuries (more serious than posted in the news story) when he was struck from behind at a lethal 45 miles per hour. Gartner was well equipped with ample lighting and a reflective vest. The perpetrator who committed this violent act left the scene and police do not have any suspects. Last July another cyclist Rick Clendaniel was killed in the shoulder of Mays Landing Road in Vineland by a driver that was allegedly driving 70 mph. The driver Jerome Byrd was charged with speeding and not wearing a seat belt.
Email ThisBlogThis!Share to TwitterShare to FacebookShare to Pinterest
Posted by Andrew J. Besold at 11:06 AM 3 comments:

Welcome to No Bikes On Trains Day

Something never change, such as NJ TRANSIT's arbitrary holiday bike on train rules:

Collapsible bicycles are accommodated on all NJ TRANSIT trains at all times. Standard-frame bicycles and Segways are permitted on the Atlantic City Rail Line at all times.

Standard-frame bicycles and Segways are permitted on other rail lines at all times, except:

Perhaps its time for NJ TRANSIT to take a new look at its rules, which seems to assume that cyclists are only boarding 2PM trains out of Penn Station.

Here is a suggested Change:


We would love to have a conversation with NJ TRANSIT to discuss creating more reasonable bike access rules.
Email ThisBlogThis!Share to TwitterShare to FacebookShare to Pinterest
Posted by John Boyle at 1:44 PM 2 comments: