Streetsblog SF picked up on this yesterday.

The Dutch Cycling Embassy (actual webpage not yet operational) a new effort by the Dutch government to share their expertise about cycling with the world, released this 7 minute plus video to announce the launching of the embassy.

Just a couple of notes:
Enjoy this great video!


Cycling For Everyone from Dutch Cycling Embassy on Vimeo.
Email ThisBlogThis!Share to TwitterShare to FacebookShare to Pinterest
Posted by Andrew J. Besold at 2:18 AM 1 comment:

Last months BPAC meeting was canceled due to areas of flooding throughout the state that prevented some members from being able to attend.  To compensate, the meeting has been rescheduled for Thursday, October 6th at 10am. All members of the public are welcomed to attend.

The agenda is the same as it was to be in September and can be seen in WalkBikeJersey's previous announcement here.
Email ThisBlogThis!Share to TwitterShare to FacebookShare to Pinterest
Posted by Andrew J. Besold at 11:51 AM 1 comment: 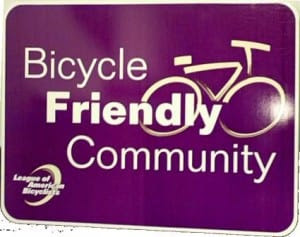 Clearly, the main reason behind West Windsor's award rests on the tireless efforts of the West Windsor Bicycle & Pedestrian Alliance.  I've long lauded their superb advocacy efforts.  And even though they are busy celebrating their well earned award, that did stop them from their work.  Just a day before announcing their BFC award, they were busy demanding (and helping) Mercer County design a more appropriate and "complete" Route 571.  This reality just goes to show how much further even New Jersey's first BFC and the rest of us really need to go.

All (two) of us at WalkBikeJersey, salute West Windsor and the WWBPA for there Bronze Level Bicycle Friendly Community Award.
Email ThisBlogThis!Share to TwitterShare to FacebookShare to Pinterest
Posted by Andrew J. Besold at 9:27 PM 4 comments:

This year, around $700 million of Federal transportation funds, which in reality is less than 2 percent of total transportation dollars, will be spent on bicycling and walking. In 2012 that figure might be a big fat zero.

We expect that in the next few days, Senator Coburn (R-OK) will ask Congress to eliminate the federal Transportation Enhancements program – the primary funding source for the past 20 years for bike lanes, trails, bike racks on buses, bike education etc. This isn’t safe or smart; it’s not good for the economy or the environment; this is bad health policy and bad transportation policy. But they are going to try because they don’t think bicycling matters.

Even though bicycling projects create more jobs per dollar than highway-only projects and cutting enhancements won’t impact the deficit – the money just won’t be spent on bicycling – some Members of Congress want to force us backwards to a 1950s highway-only mindset: as if oil embargoes, congestion, smog, the obesity epidemic and climate change never happened.

Now is the time to Save Cycling, so we are asking you to contact your Senators and urge them to support continued funding for biking and walking. Don’t let them take away this vital investment program for smart, sustainable, safe transportation choices.

I Bike I Vote
Email ThisBlogThis!Share to TwitterShare to FacebookShare to Pinterest
Posted by John Boyle at 2:54 PM No comments:

As we mentioned in our August 29th post NJ TRANSIT has banned the boarding and deboarding of bicycles at low platform rail stations. You can take action by sending this letter to James Simpson, Commissioner for the New Jersey Department of Transportation and Chairman of NJ TRANSIT. We encourage you to add your own personal comments.

Scroll right to view the letter or click here to view the web page in its own tab.
This new policy change cuts off access to more than half of NJ TRANSIT’s heavy commuter rail stations including the critically important Hoboken Terminal. On some NJ TRANSIT Train lines, the lack of high level platform stations in conjunction with this new policy effectively creates a ban of bicycles from those NJ TRANSIT lines. On the Montclair/Boonton Line only 15 of 28 stations have high level platform stations. On the Pascack Valley Line it’s only 6 of the 18. 8 of 26 on the Gladstone. 6 of 19 on the Raritan Valley and 5 of the 21 stations on the Main/Bergen Line.

Other popular and populous locations are affected. Bound Brook near the Delaware and Raritan Canal, Convent Station on a popular rail trail. Ditto for Belmar, Manasquan, Perth Amboy, Clifton, Suffern and 4 stations in Montclair.
Email ThisBlogThis!Share to TwitterShare to FacebookShare to Pinterest
Posted by John Boyle at 5:35 PM 1 comment:

As part of my work with the East Coast Greenway Alliance I spent some of my time last week inspecting the flood damage wrought by Hurricane Irene here in the New Brunswick area.  While the stretch that goes through Johnsons Park in Piscataway and Highland Park escaped relatively unscathed, the Delaware & Raritan Canal Towpath section just outside of New Brunswick suffered sever damage.

For much of its length the D&R Towpath lies in the flood plan of both the Raritan and Millstone Rivers leaving it highly susceptible to flood damage.  Unfortunately with record setting rains and high winds from Irene, it is no surprise that the damage was really bad on the section between Landing Lane in New Brunswick to Easton Ave at South Bound Brook.  This six mile section of the trail was barely passable last week.  What normally takes me less than half an hour to ride took me over two hours due to numerous blow-downs and sever scouring and erosion of the once smooth trail surface. It's safe to say that this section of the Towpath and East Coast Greenway is closed for the foreseeable future.


Read more »
Email ThisBlogThis!Share to TwitterShare to FacebookShare to Pinterest
Posted by Andrew J. Besold at 12:30 AM 1 comment:

The New Jersey Department of Environmental Protection has completed a bridge over the tidal Delaware and Raritan Canal in Hamilton Township. This along with a short extension of the trail completes the canal towpath trail from Canal Blvd in Trenton to 2nd St in Bordentown.

The completion of the project came as a total surprise to this author. Since 2008 plans have been set to connect the towpath with the RiverLINE bridge over the Crosswicks Creek (which serves as the border between Burlington and Mercer Counties). The usual environmental and bidding issues set the project back and it was impossible to nail down a completion date. We found out the hard way, by spotting the trail while glancing out the train window

Despite the low key opening the Bordentown City Enviromental Commission and the Friends of the Hamilton Trenton Bordentown Marsh are planning a couple of walks on the trail this fall. Check their respective web pages for details.

The D and R canal is a major component of the Delaware River Heritage Trail which will be the NJ twin of the East Coast Greenway running from Calhoun St Bridge in Trenton to the Ben Franklin Bridge. Burlington County has let a contract to do on street road markings and signage between Bordentown and Fieldsboro. The work will also include a new trailhead at the Bordentown Boat Launch. Meanwhile planning continues for the next phase from Route 130 near Fieldsboro to the waterfront park in Burlington City.