'Hillier than Thou' bike ride to benefit NJBWC

Not doing anything next weekend?  Want to torture yourself in New Jersey's most notorious and vertically challenging ride for a cause that could make your future ride safer and more pleasant?  Well step right up and challenge yourself to 12,000 feet of climbing over 100 miles to help support the New Jersey Bike and Walk Coalition in Hillier than Thou. 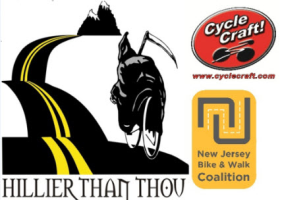 Wait!  Wait!  Stop screaming and running for the door!  There's an easier Metric Century that "only" climbs 7,000 feet.  :)  Whichever you choose you will be "entertained" by the infamous Fiddlers Elbow Road that climbs over 900 feet and attains a wall-like 22% grade.  Between the delirium caused by oxygen deprivation and lactic acid buildup in your screaming legs, you'll be treated to New Jersey's world class, scenic rural cycling in Morris, Warren and Hunterdon Counties.

411
While this is not a race event, the ride will be timed so riders who make the time cut will receive a special award. Awards will be given to the top three male and female finishers, and the top finisher in age categories 35+, 45+, 55+ and 60+.

In addition, enter the Hillier Than Thou KOM/QOM Strava competition! Sign up for Strava before the ride and track your ride. A KOM and QOM jersey will be awarded to the top male and female Strava winners. Come back next year and wear your well-earned KOM or QOM jersey!

The rides will feature rest stops, tech T-shirts and post ride Bar-B-Que and entertainment. Day-of registration is available; ride fee will be $100. Hillier Than Thou starts in Long Valley, NJ. Parking and ride staging will take place at Long Valley Middle School.

Don't fear the reaper, sign up today! Proceeds from the event will go to the New Jersey Bike and Walk Coalition to fund the campaign to enact a 3-Foot Safe Passing Law in New Jersey.
Email ThisBlogThis!Share to TwitterShare to FacebookShare to Pinterest
Posted by Andrew J. Besold at 1:32 AM 1 comment:

The Camden County Bicycling and Multi-Use Trails Master Plan will guide the implementation of multi-use trails and on-road bicycle facilities in Camden County. The project, based on recommendations initially made in the 2004 Camden County Open Space and Farmland Preservation Plan, will connect county residents to greenways and trails, as well as enhance opportunities to walk or bike to schools, parks, shops, and employment centers.

INITIATIVE WILL MAKE STREETS FRIENDLY FOR ALL USERS OF ALL ABILITIES
Program designed to create street corridors and intersections that will be safe
for pedestrians, motorists, bicyclists, seniors, children, and the mobility-challenged

Newark, NJ – September 25, 2012 – Mayor Cory A. Booker and Engineering Director Mehdi Mohammadish announced today that the City of Newark adopted a Municipal Council Resolution creating a “Complete Streets Policy.” This policy was adopted by the Municipal Council on September 6, 2012, is designed to create street corridors and intersections that will be safe for pedestrians, motorists, bicyclists, seniors, children, and the mobility-challenged.

The Complete Streets Policy will create a comprehensive, integrated, connected multi-modal network by facilitating connections to bicycling and walking in all of the City’s street and sidewalk projects.

“We have taken a holistic approach to making our streets and sidewalks safe and accessible for all of our residents and visitors, whether they walk, drive, or bicycle. Newark’s streets will be the safest and most welcoming in the entire nation,” Mayor Booker said.

“We have always emphasized the highest levels of accessibility and safety in our efforts to maintain and improve our streets and sidewalks. The Complete Streets program will provide us with a comprehensive plan to achieve those goals,” said Director Mohammadish.

“Complete Streets is defined as a means to provide safe access for all users by designing and operating a comprehensive, integrated, connected multi-modal network of transportation options,” said Manager of Traffic and Signals Jack Nata. “Newark is committed to creating street corridors and intersections that safely accommodate all users of all abilities.”

The Complete Streets program calls for the following:

Read more »
Email ThisBlogThis!Share to TwitterShare to FacebookShare to Pinterest
Posted by John Boyle at 8:39 AM 1 comment: 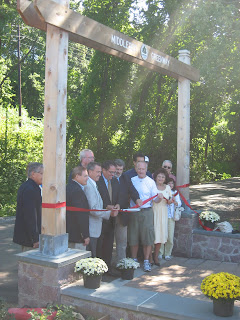 After twenty years in the making, the Middlesex Greenway opened in grand fashion on Saturday, September 15th.  The  mayors of Edison, Metuchen and Woodbridge, three towns that the Greenway traverses, along with numerous Freeholders and a US Senator were all in attendance.  While there are still a few details that need to be completed before the initial 3.5 mile trail segment is entirely complete, the popularity of the trail was readily apparent on the grand opening Saturday as at least one hundred people were observed using the trail, most of whom were not attending the grand opening ceremonies.

It was interesting to see that this grand opening event attracted the attendance of Senator Bob Menendez.  Support for bike and pedestrian infrastructure would seem to make good politics.

This project also has great potential for providing a Safe Routes to School.  The Herbert Hoover Middle School of Edison is directly adjacent to the trail.  The new bridge over US Route 1 built by NJDOT now provides a nearly traffic free route for Edison students who live on the west side of Route 1 and might attend the school.  Middle school age children were seen riding their bikes almost every time this author traversed the bridge over US Route 1.

Finally, it is hoped by greenway planners and advocates that this 3.5 mile segment is only the beginning.  To the west there are already plans in Metuchen to extend the Greenway to the limits of the Metuchen boarder and possibly beyond.  On the eastern end there are tentative plans to extend the trail over the Garden State Parkway and into Perth Amboy.  This addition would greatly increase the transportation utility of the Middlesex Greenway.  However, even though the train tracks over the Parkway haven't been used for years, the railroad company has plans to reactivate the tracks in the future to service warehouses, industry and a possible port on the Raritan River in Edison.

Either way, the Edison Greenway is greatly welcomed  recreation and transportation amenity in northern Middlesex County and many hope that this will be the first of a number of other rail trail and other similar multiuse trail projects in the county.

For more photo's see the slide show below. All photo's in this post and below slide show are copyrighted and are the sole property of Andrew J. Besold.


Email ThisBlogThis!Share to TwitterShare to FacebookShare to Pinterest
Posted by Andrew J. Besold at 3:00 PM 3 comments:

No Bikes on NJ TRANSIT Trains Til Sundown

Today is the Eve of Yom Kippur and as such no bikes are permitted on NJ TRANSIT trains (sans Atlantic City Line). You may (or may not) be able to take your bike on the train after Sunset (6:50 PM) depending on your conductor's interpretation of the bike on rail rules.

Light rail trains and buses are not subject to the holiday restriction and folding bikes are always permitted on trains at all times as per NJ Statute 27:25-5a.

Email ThisBlogThis!Share to TwitterShare to FacebookShare to Pinterest
Posted by John Boyle at 12:16 AM 2 comments:

I just happened to be watching the news moments ago and was reminded that Rosh Hashanah starts tomorrow evening.  Lucky for me I know NJ TRANSIT's bicycle policy better than almost anyone and remembered that, "Bicycles are not permitted on the day before Rosh Hashanah and Yom Kippur, but are permitted on the holidays themselves."

Up until a few moments ago my plan to get to my bike education job in New York City, as it has been over a dozen times this summer, was to roll up to the New Brunswick train station at 7:45am tomorrow, with ticket in hand and get on the train that would get me to the job just on time.  Instead of taking the train with my bike to get to my job tomorrow, I will have to drive and take PATH (which has no such restrictions).  Lucky for me, I didn't find out about this at 7:58am as the train pulled into the station.  Lucky for me again, I have the option of driving a car.

If you end up riding any NJ TRANSIT trains tomorrow, particularly the busier North East Corridor, let us know if they were really too crowded to really warrant banning bikes.  Leave a comment here and tell us when, what line you used and between what stations you traveled.
Email ThisBlogThis!Share to TwitterShare to FacebookShare to Pinterest
Posted by Andrew J. Besold at 10:20 AM 2 comments:

New Jersey holds on to its Federal Trail Funds

Our friends at the Tri-State Transportation Campaign reported earlier today that New Jersey and 47 other states have decided to use their Federal Trail funding (Florida and Kansas opted out).  This is great news here and around the country.  With the new federal transportation law, MAP-21, states could have otherwise opted to used these funds for more "traditional" transportation projects, like highways, railroads, airports, etc.

The reason why these funds have been preserved was because advocates and everyday citizens demanded that these funds be used for what they were originally intended.  Yes, recreational trails are good for maintaining our physical fitness but if planned properly, many of these trails can also serve transportation purposes as well.  That 48 states decided to preserve these funds is a good sign and sends a clear message to those politicians that still don't quite get that alternative transportation is indeed still transportation.
Email ThisBlogThis!Share to TwitterShare to FacebookShare to Pinterest
Posted by Andrew J. Besold at 10:14 PM 2 comments:

We at WalkBikeJersey have long made the connection between open-space preservation and New Jersey's superb, if not world class road cycling.  Well now the Sourlands Planning Council is making the connection as well by hosting the Sourlands Spectacular, a hiking and road cycling event, on Saturday September 8th starting at 7:00am.  If you can't make the Gran Fondo on Sunday (like me), then this event could be for you.

If you are not familiar with the Sourland Mountain, it is located on the boarders of Mercer, Hunterdon and Somerset Counties.  It is the last large contiguous forested area in Central New Jersey and it is home to some of New Jerseys best road cycling.  The area's geology has made it near impossible for agriculture and not very suitable for sprawl development.  This fact and progressive forward thinking local leaders determined to maintain the area's natural heritage have nearly halted sprawl development on and near the mountain.  The end result for cyclists is that roads that have long been small, very quite, scenic favorites of New Jersey's cyclists, have remained unchanged for decades.

Much thanks needs to go to Micheal Heffler for helping the Sourlands Planning Council make this connection.  He not only got the Council to see that their efforts to preserve the Sourlands has helped maintain the areas world class cycling but also planned the routes for Saturday's ride.

There are three road ride options; a 37 mile, 50 mile and a Metric Century (63 mile).  More info about the event and directions can be found on the Sourlands Spectacular website.
Email ThisBlogThis!Share to TwitterShare to FacebookShare to Pinterest
Posted by Andrew J. Besold at 1:20 AM 1 comment: