The Bicycle Coalition of Greater Philadelphia (BCGP) is well aware of the formidable barrier to New Jersey known as the Delaware River. They have collaborated with other organizations to advocate for the design and build of a ramp to replace a 39 step stair tower in Camden and to include a multi-use path on the proposed I-95 Scudder Falls Bridge in Ewing.

The new Report titled "Crossover: Bridge Ahead Impassable" takes a look at bicycle and pedestrian access on 12 bridges along a 60 mile corridor between the Washington Crossing and Commodore Barry Bridges. Only 5 of the 12 allow bicyclists and pedestrians to cross and all of them pose restrictions. 4 require walking your bicycle and while the Ben Franklin Bridge allows you to ride across it is only open during limited hours.

With this report, BCGP shines a new light on lower Delaware River bridges, and how their inaccessibility to pedestrians and bicyclists is stymieing trail networks being built on both sides of the river.


Crossover: Bridge Ahead Impassable
Email ThisBlogThis!Share to TwitterShare to FacebookShare to Pinterest
Posted by John Boyle at 12:05 PM 1 comment:

As the reconstruction of Route 35 nears time is running short on the final decision to stripe bike lanes along the road where it is feasible. Complete streets advocates have been hearing positive if anecdotal comments from sources within NJDOT that bike lanes along with improved crosswalks and sidewalks are being given serious consideration.

However in places like Lavallette and Seaside Park the installation of bike lanes comes up against a design barrier; Bike lanes are incompatible with standard angle parking. The lack of driver visibility while backing out into traffic poses a crash hazard to bicycles and it is clearly not recommended in engineering manuals.

Angled parking is important to beach communities where parking is at a premium, a block with angled parking increases the capacity for a typical block by 50%. Asking a community to give up 1/3 of its parking spaces by converting to parallel parking is an extremely heavy lift.

But all is not lost! There is a very simple solution to the angled parking conundrum that greatly improves safety for bicyclists, pedestrians and outgoing parked vehicles. It is known as Reverse Angle or Back In Angle parking. 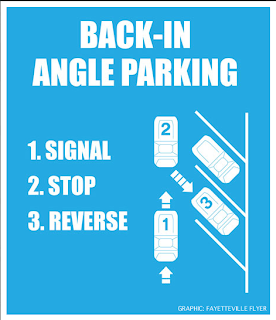 More on back-in angled parking after the jump.

This post is reprinted from the Circuit Coalition's Crossing Paths Blog:

Tomorrow on June 12th, the Burlington County Board of Chosen Freeholders will hold a hearing and vote on a reduction of the County's Open Space tax. The current 4 cent tax will be cut to 1.5 cents: a 63% reduction from $20M per year to $7.5M per year. The County claims that a $48 million dollar surplus in th program would be enough to continue build out of the County's Master Plan. While the proposal is a "one year cut", it is uncertain that the 4 cent tax rate would ever be restored due to the fact that it could be seen as a 167% tax hike.

The Rancocas Greenway is a case in point. The County has spent millions in Open Space Funds acquiring land bordering the Rancocas Creek. Virtually the entire corridor between Delanco and Brendan Byrne State Forest is in Municipal, County or State ownership. The opportunity to build the 25 mile multi-use trail is now.

The Freeholders are expected to vote on the proposal at the end of the meeting.

Please attend this meeting and ask the Freeholders to preserve the current tax rate and build the 65 miles of Rancocas Greenway, Delaware River Heritage and Kinkora trails. You can also leave a positive comment on the County's Facebook page.


Email ThisBlogThis!Share to TwitterShare to FacebookShare to Pinterest
Posted by John Boyle at 2:48 PM 2 comments:


According to NJ.com and Phillyburbs.com 24 Year Old Andrew Caprizzi of Paramus, NJ was killed Sunday Morning on Route 563 in Woodland Township south of Chatsworth. Andrew was attempting to make a U-Turn when he was struck by a woman driving a vehicle northbound. The driver was treated for her injuries at Deborah Hospital.

Andrew was warming up for the NJ Individual Time Trial Championship, which is held annually on Route 563, a rural two lane road with bike lanes, very few intersections and a speed limit of 50 mph in the heart of the Pine Barrens. Like many amateur time trial events, this race is conducted on open roads.

According to his obituary Andrew worked as an Assistant Track Team Coach for Holy Angels School in Demarest, NJ and at the Running Store in Ridgewood, NJ. We are saddened by another tragic death by automobile in our region and our condolences go out to Andrew's family and friends.
Email ThisBlogThis!Share to TwitterShare to FacebookShare to Pinterest
Posted by Andrew J. Besold at 8:45 AM 2 comments:

SOBI - Bike Sharing Minus the Hype

SOBI or Social Bicycles is a bike sharing program that officially launches today in Hoboken. SOBI is a 6 month pilot project and will only feature 25 shared bicycles while bicycle rental partner Bike and Roll will operate a traditional bike rental operation on the waterfront near Pier A.

SOBI will operate differently than the current bike sharing model of docking stations that Citi Bike uses. SOBI can be described as a technological refinement of the Deutsche Bahn Call-A-Bike program, they can be locked anywhere within the City although there will be five designated hub locations that users will be encouraged to return their bikes to make them easier to manage.

If you live, work or frequently visit Hoboken you can sign up for SOBI here. The cost for enrollment is $15 a month and that gives you 60 free minutes a day. Anything over 60 minutes will cost you $10 per hour. There is also a required 30 minute orientation to familiarize participants with this unique technology. The price point seems to be designed to discourage visitors from using SOBI instead of renting a bike. Bike and Roll will be charging $10 an hour or $34 a day and will be open from 10AM - 5PM.

Compared to the behomoth of Citi Bikes SOBI is a pint sized cousin. However if made permanent the program will expand to 300 bikes, comparable to bike share operations in larger cities such as Chattanooga TN and Fort Lauderdale FL.
Email ThisBlogThis!Share to TwitterShare to FacebookShare to Pinterest
Posted by John Boyle at 12:30 AM 2 comments: