New Ideas To Make New Jersey's STROADS Safer For All

Every year the Tri State Transportation Campaign publishes the Region's most dangerous roads for walking report and Route 130 in Burlington County consistently makes the list. Between 2009 and 2013 57 pedestrians were reportedly hit by motorists on the corridor between Bordentown and Pennsauken but 14 of them (25%) were killed.

Many urbanists and pedestrian safety advocates identify Route 130 as an exemplary case of what urban planners now call a STROAD.  Charles Marohn of Strong Towns defines it better than I could in this article.

"A STROAD is a street/road hybrid and, besides being a very dangerous environment (yes, it is ridiculously dangerous to mix high speed highway geometric design with pedestrians, bikers and turning traffic), they are enormously expensive to build and, ultimately, financially unproductive"

The New Jersey version of a STROAD is particularly hazardous. They feature jug handles that function like mini on-ramps, menacing anyone walking or biking along a STROAD. Those eponymous Jersey Barriers do a wonderful job preventing head on collisions but they replaced medians for pedestrians to wait and have proven to be deadly for wildlife. The Tri State Transportation Campaign found that STROADS were responsible for 70% of the pedestrian deaths in New Jersey.

As for Route 130 The Delaware Valley Regional Planning Commission is currently conducting a corridor wide study that builds upon the Commission's 2012 report of the bewildering 130/206 merge in Bordentown Township. The 130/206 report offers some interventions that for the first time shows in an official government document a tangible effort to tame the STROADS of New Jersey. 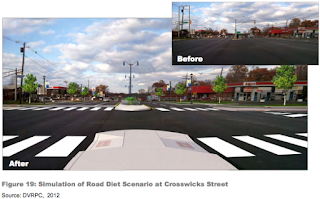 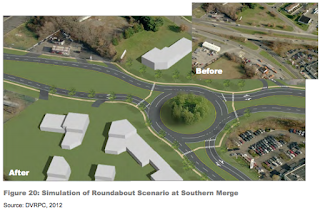 If we are serious about Vision Zero, complete streets and quality of life in New Jersey then we need reimagine STROADS as attractive Multi Way Boulevards. Route 130 in Delran is an area where serious pedestrian and motor vehicle crashes have occurred. Converting the 6 lane STROAD to a Boulevard would make it safer walk and bike along and across the highway, while reducing conflicts. There is already enough right of way here to accommodate everyone safely without creating gridlock.

Email ThisBlogThis!Share to TwitterShare to FacebookShare to Pinterest
Posted by John Boyle at 8:47 AM 17 comments: