If you subscribe to Streetsblog then you may have seen the latest entry looking at Google Map's new Street View archive, which lets look at street view images back to 2007. It shows some exemplary before and after shots of bike, pedestrian and transit improvements to streets in Indianapolis, New York and Cleveland. So let's look at a few transformations right here in New Jersey. 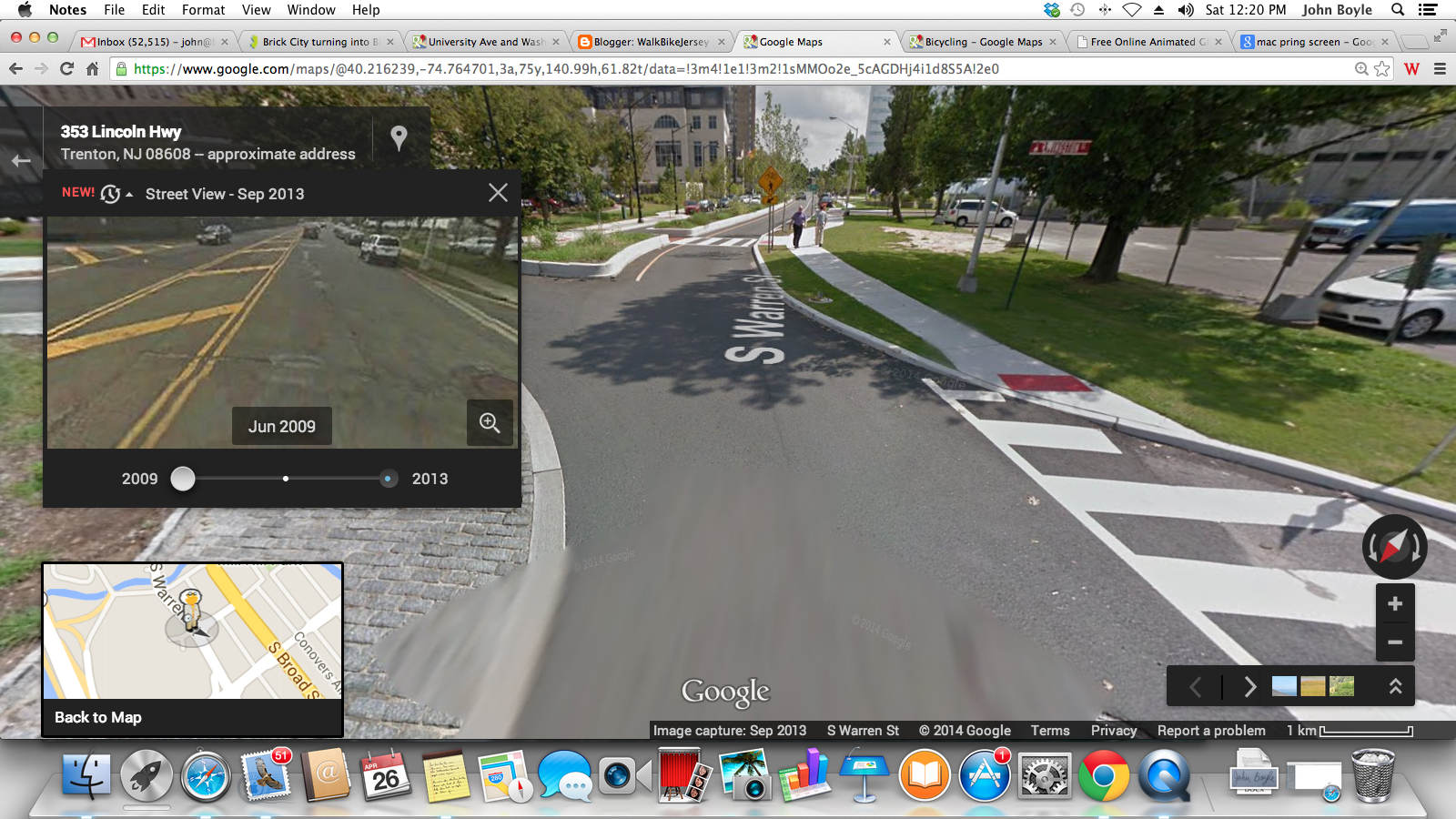 A wide poorly marked street was transformed with a roundabout, landscaping and bike lanes. 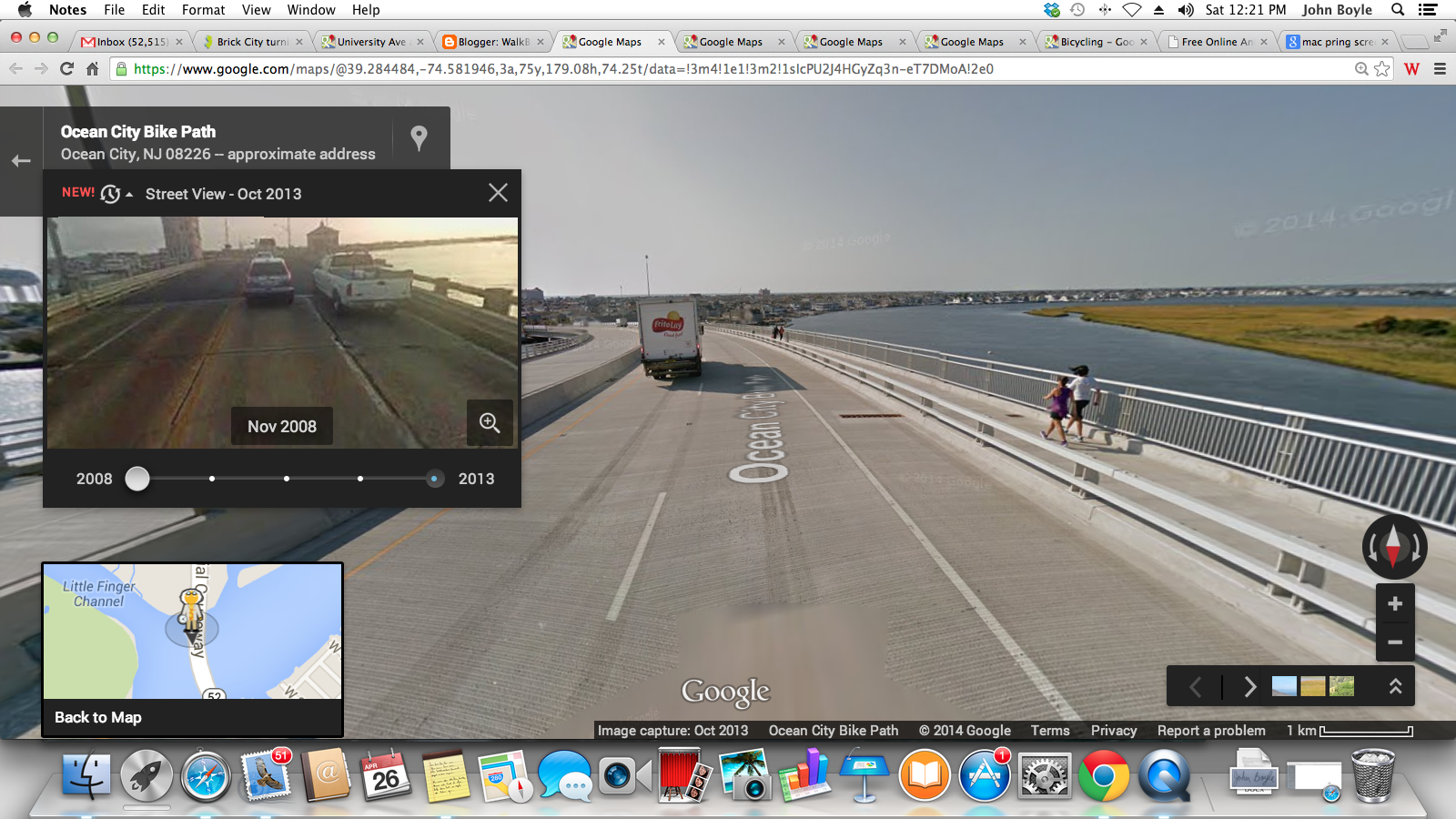 Before the opening of the causeway bicycles and pedestrians were banned from using this bridge. This project is NJDOT's crown jewel. 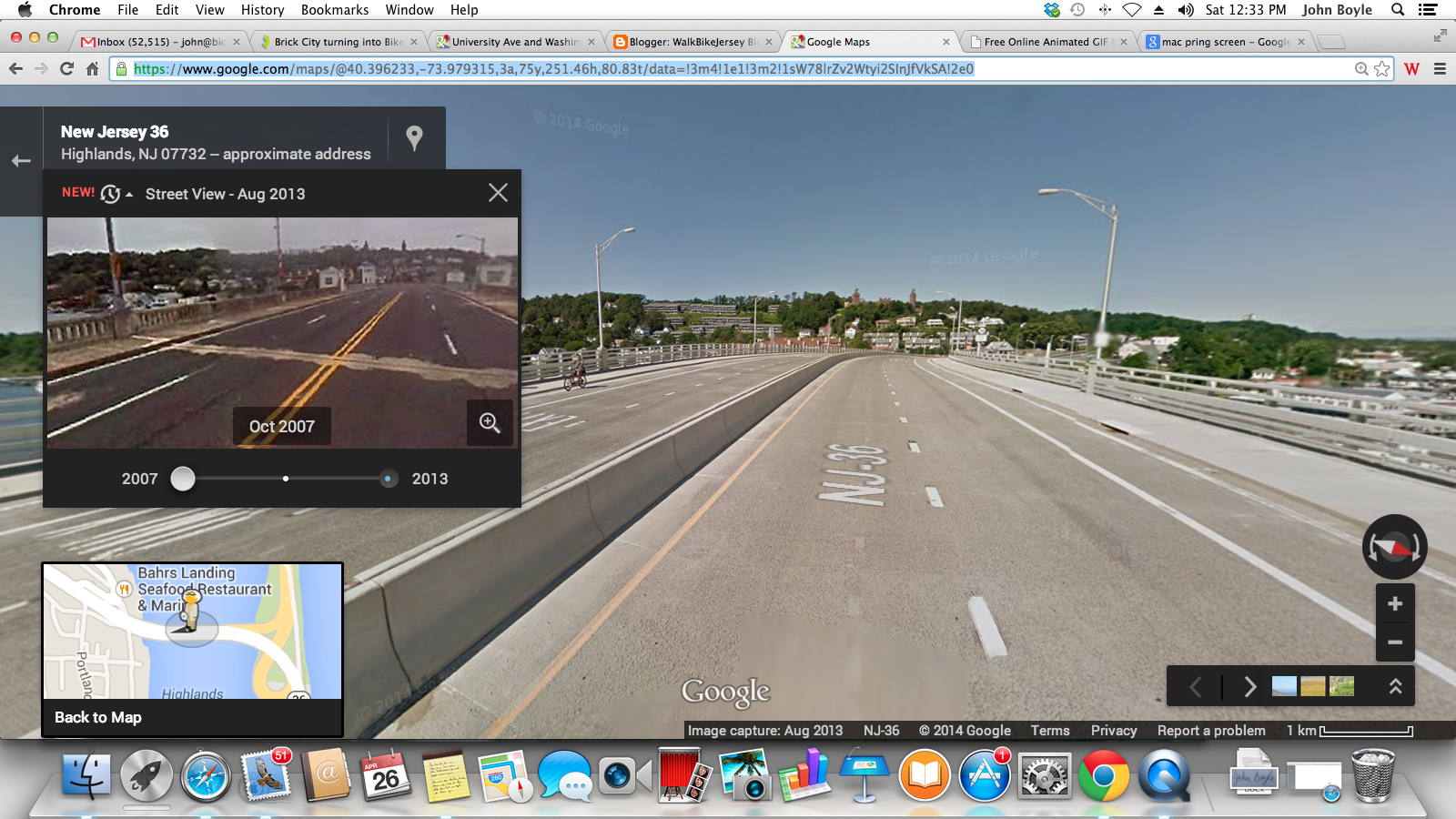 NJDOT's first large scale complete streets project, not as evolved as the Ocean City bridge but a major improvement nonetheless. Also provides a critical connection between the Henry Hudson Trail in Highlands with the Sandy Hook Bikeway. 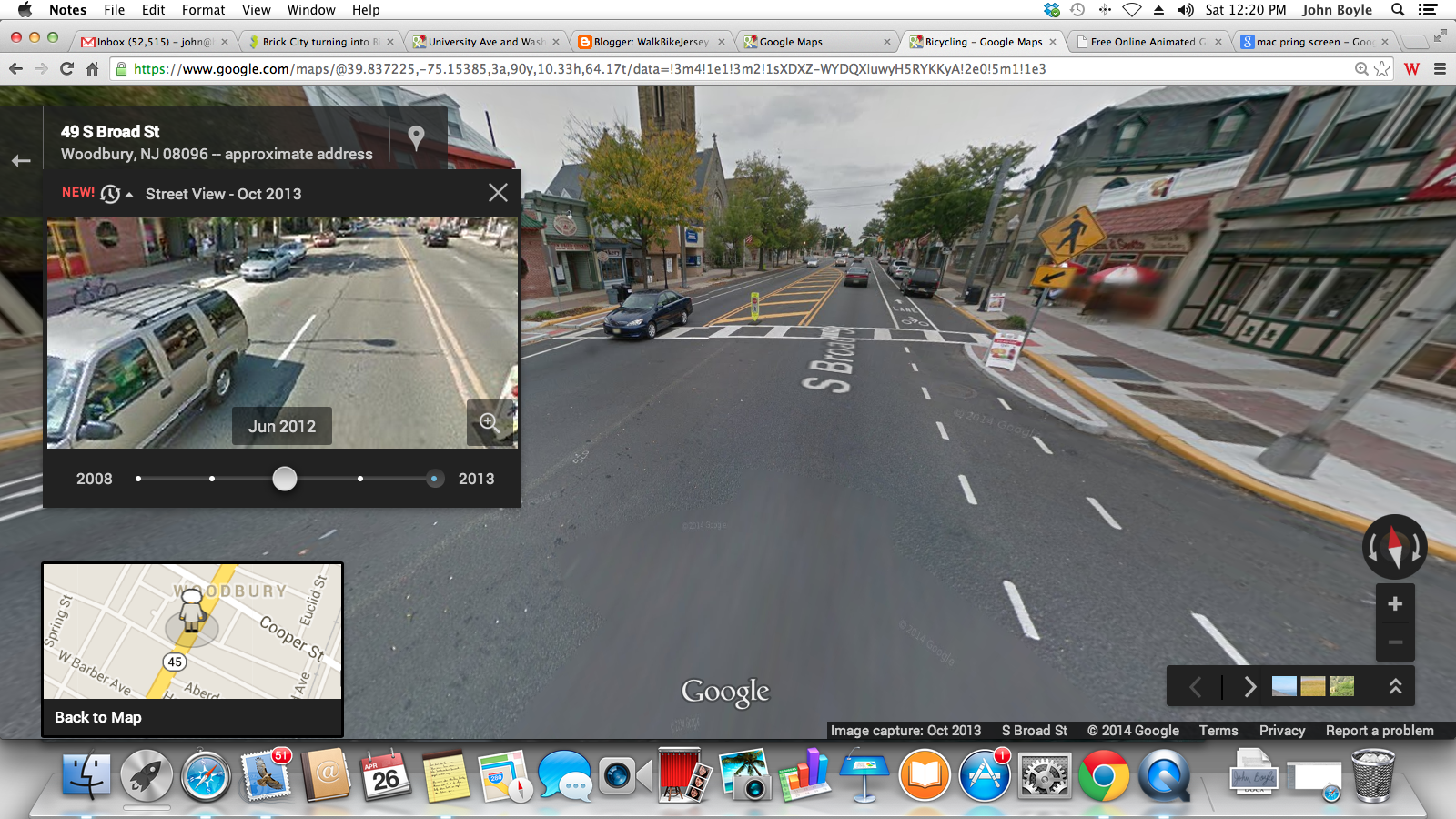 NJDOT's makeover of Woodbury's commercial street is a classic road diet with some nice touches at the intersections. Door zone bike lanes will continue to be an issue with this configuration until the political will evolves to permit the reduction of on street parking. 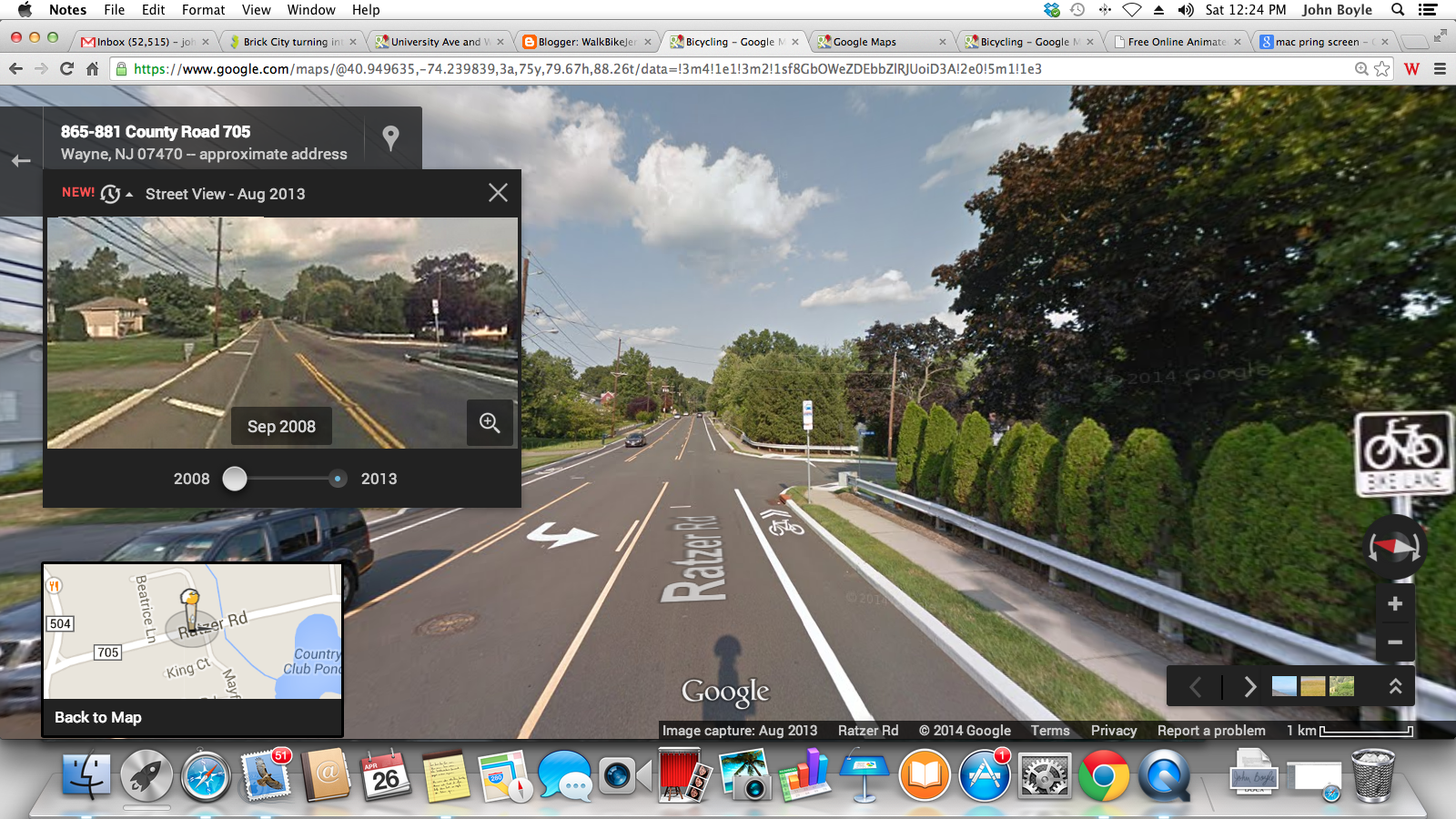 I wanted to include this to show that making over a street doesn't have to involve major construction project. Simply changing the paint after resurfacing a road is the easiest and most common way to improve a street.

Email ThisBlogThis!Share to TwitterShare to FacebookShare to Pinterest
Posted by John Boyle at 12:40 PM 2 comments:

The momentum to complete the Barnegat Branch Rail Trail in Central Ocean County continues with a new section between Waretown and Forked River that opened quietly in late fall of 2013. On Saturday this former no mans land around the Oyster Creek Nuclear Plant was teeming with cyclists, joggers, dog walkers. And it was more than people out for nice walk or ride.  I observed perhaps a dozen trail users accessing local shopping centers and NJ TRANSIT bus stops along the adjacent Route 9.


The south end of the trail now extends 7 miles from just north of Bay Avenue in Barnegat Township to just south of Lacey Rd in Lacey Township. Other completed sections are in Beachwood Boro and Berkeley Township. When completed the trail will stretch 15 miles to downtown Toms River. The surface is mostly a packed stone dust aggregate but paved at the road intersections along with boardwalk bridges. I doubt if anyone with bike tires wider than 23mm (.9 inches) will have an issue with this trail.

But the key segment that will connect the Lacey section with the north end has proven to the most explosive. For more than a decade Township officials have fought for and finally won to convert the abandoned Barnegat Branch line into a new road (Railroad Ave extension). This road is envisioned as a bypass for Route 9 and opposition to the road in favor of the converting the rail to a trail was well organized but in the end the Township voted in leadership that favored the road in 2012. The plan moved forward when NJ DEP issued a permit for the road in August of 2013.

The trail is planned to built as a sidepath along this stretch of road but one has to wonder if the outcome would have been different if the southern half of the trail was completed before the 2012 election.

Regardless, there is a long way to go before the completion of Railroad Avenue, the final design (which will give an estimate closer to the real cost) has not been completed. The Township has a complete streets policy and this is one project that we will be monitoring to see if this local project made from scratch walks the walk.

Email ThisBlogThis!Share to TwitterShare to FacebookShare to Pinterest
Posted by John Boyle at 12:26 PM 4 comments:

10 Miles of Bike Lanes and Continuous Sidewalks for Route 35


NJDOT announced the complete streets plans for Route 35 which includes 10 miles of bike lanes, six of which are buffered (note the left frame) and 12 miles of continuous sidewalk with ADA compliant curb cuts, crosswalks and countdown signals. This may turn out be one of the largest complete streets reconstruction projects in the Country. To learn more go to this article on the Tri State Transportation Campaign's MTR Blog.
Email ThisBlogThis!Share to TwitterShare to FacebookShare to Pinterest
Posted by John Boyle at 11:48 PM 1 comment: