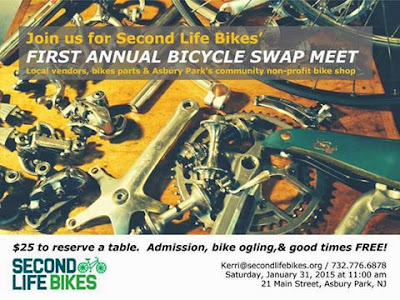 Has the cold of winter got you down?  Is your bike hiding for the winter?  Dreaming of shinny bikes on warm sunny days?  Well if this sounds like you, why not take drive or train ride down to 2nd Life Bikes in Asbury Park this Saturday at 11am for their First Annual Bicycle Swap Meet.  2nd Life Bikes' shop is huge so there is plenty of room inside.  Beside the hundreds of classic bikes 2nd Life has in stock, we've been told that there will be 20 vendor tables.  Take a look below at some of the bikes that we've been told will be for sale at the Swap Meet.  Be there or be square!


Email ThisBlogThis!Share to TwitterShare to FacebookShare to Pinterest
Posted by Andrew J. Besold at 1:54 AM 34 comments:

Helping and Facilitating the "Invisible Cyclist"

While it has been frustrating for me to sit on the professional sidelines of bicycle and pedestrian planning, my recent job foray as a professional driver has given me the ability to see and observe a great deal of the real-world transportation environment of northeastern New Jersey.  Recently I had to get the vehicle washed that I was driving at the Super Car Wash of Elizabeth on Rt 1 & 9 just south of the Bayway Circle.  Super Car Wash employes an army of men to do the detail work of sweeping the inside of the car and drying it off everywhere when it comes out of the mechanized washed.  Nearly all of these hardworking men are from Spanish speaking America. 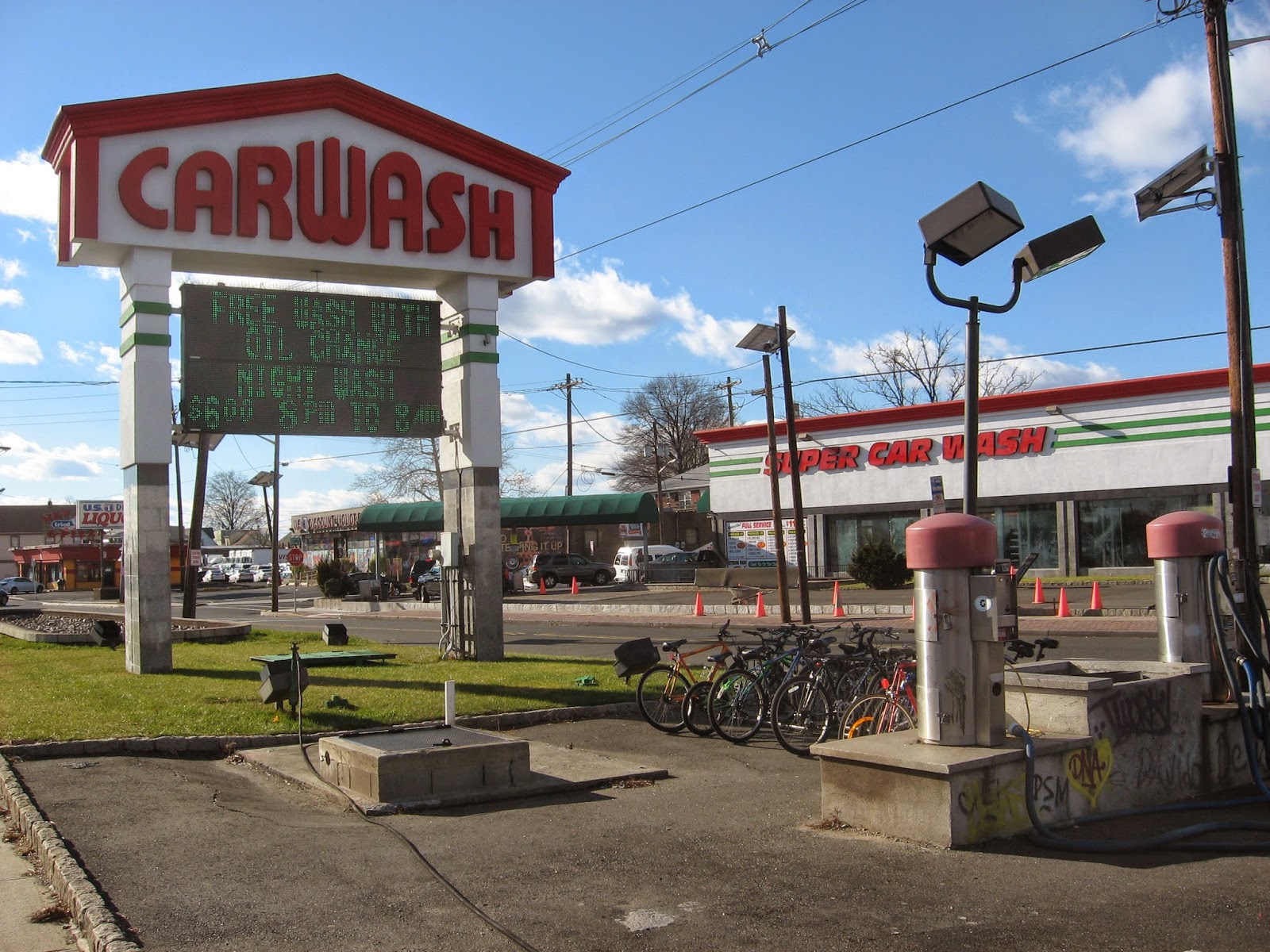 Well, to my surprise Super Car Wash provided a bike rack for its employees and from the look of the rack in the photos, it would seem that a large number of its employees get there by bike.  While the rack is of the less than idea "wheel bender" variety, it seems to work rather well here as the employees can keep an eye on their wheels. 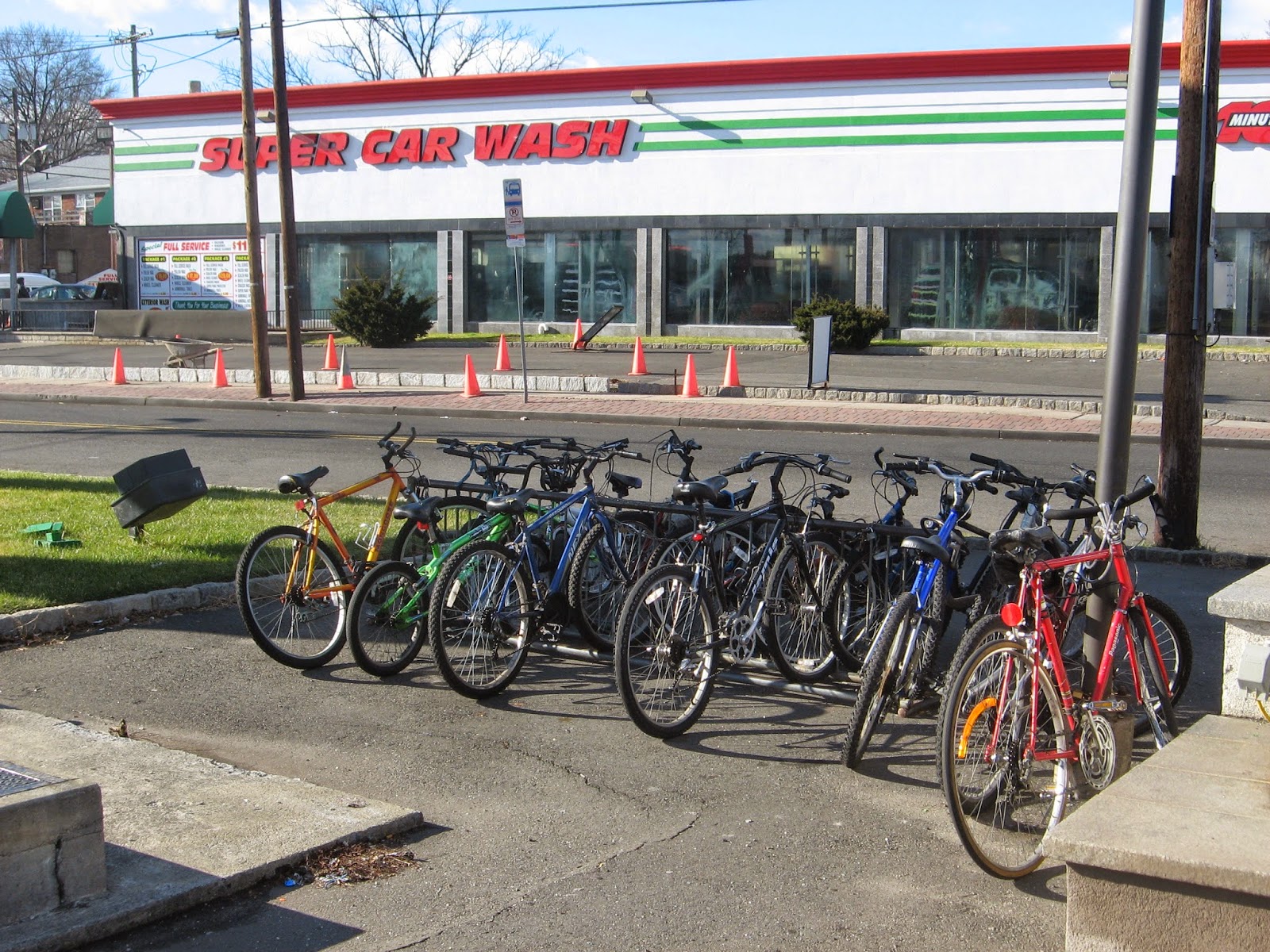 Hats off to Super Car Wash for providing bike parking for its employees.  While maybe not quite a "Bicycle Friendly Business" in the eyes of the League of American Bicyclists, Super Car Wash provides a good basic model for other businesses who have a employees that rely on a bike to get to work.  Is providing bike parking really all that hard, particularly when so many of an employer's workers use a bike to get to the job?
Email ThisBlogThis!Share to TwitterShare to FacebookShare to Pinterest
Posted by Andrew J. Besold at 1:18 AM 36 comments:

According to the NJ State Police 563 people were killed by motor vehicle crashes in 2014, a 4% increase from 2013. However people in cars and on bicycles actually saw slight declines. There were 170 people killed by motor vehicles while walking in New Jersey, a 28% increase. Pedestrians now account for 30% of all fatalities in New Jersey but as the US Census American Community Survey shows only 3.1% of the residents walk to work.

Inattentive driving (distracted?), impaired driving and speeding were the primary factors for 73% of all fatal crashes. Traffic deaths take their greatest toll on older New Jerseyans, more than 50% of the victims were aged 50 and over.


The societal and economic losses of traffic fatalities is almost impossible to comprehend. The National Highway Safety Administration estimates that in 2010 the economic and societal costs of each traffic fatality was about 6 Million dollars, which tallies up to a $3.4 Billion loss for the State of New Jersey in 2014, nearly equal to NJDOT's entire transportation budget.

Recently New York City and San Francisco have adopted Vision Zero policies. While much of the early discussion in NY and SF has been around education and enforcement the Swedes have attained much of their success through improving the infrastructure as quoted in this article in the Economist.

Planning has played the biggest part in reducing accidents. Roads in Sweden are built with safety prioritised over speed or convenience. Low urban speed-limits, pedestrian zones and barriers that separate cars from bikes and oncoming traffic have helped. Building 1,500 kilometres (900 miles) of "2+1" roads—where each lane of traffic takes turns to use a middle lane for overtaking—is reckoned to have saved around 145 lives over the first decade of Vision Zero. And 12,600 safer crossings, including pedestrian bridges and zebra-stripes flanked by flashing lights and protected with speed-bumps, are estimated to have halved the number of pedestrian deaths over the past five years.

Completes Streets policies have been aggressively promoted to counties and municipalities by NJ DOT, but while many local governments have adopted policies few have been willing to implement changes. Vision Zero is the broader reaching goal that provides clarity and accountability for strategies like complete streets policies as well as targeted education and enforcement.
**Traffic fatalities divided by total population

Email ThisBlogThis!Share to TwitterShare to FacebookShare to Pinterest
Posted by John Boyle at 3:33 PM 5 comments: