A look back at last weeks Ciclovia in New Brunswick

On Sunday, October 12th the City of New Brunswick held its last Cyclovia event of the season.  John Boyle covered the first event last summer but as I have been away from New Jersey in Idaho, Seattle and then Germany over the past 15 months this was my first Cyclovia and I figured I'd go take a look and offer a fresh perspective on the event. 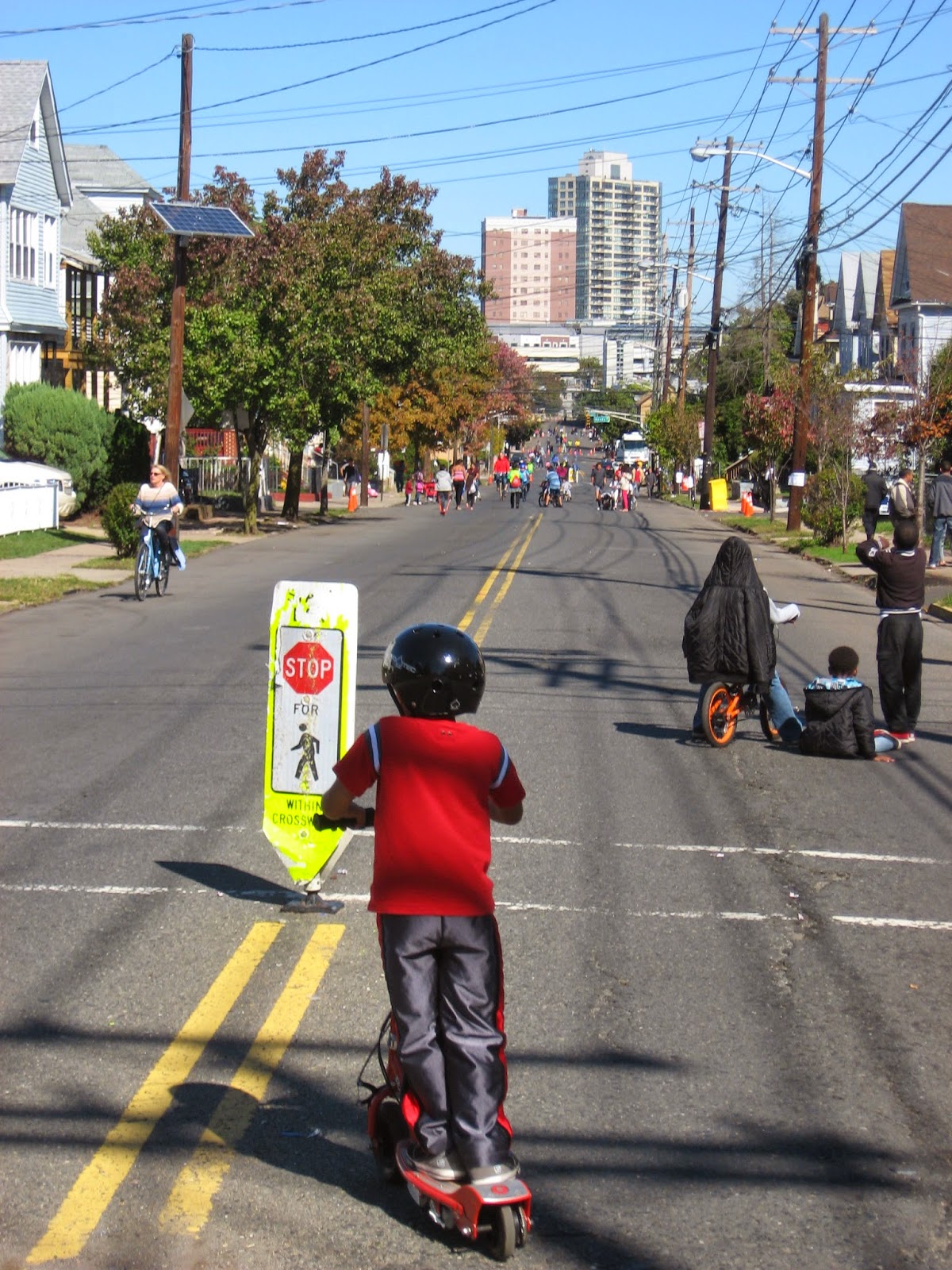 The weather on that Sunday couldn't have been better and I was pleasantly surprised to find a very well run event, worthy in every way of the spirit and planning of much larger Cyclovia events all over the world.  Admittedly, New Brunswick and the event organizers had plenty of time to refine the event by the time I got to experience it but that only reinforces my admiration of those in charge as it would have been really easy to just give up after one or two possible mediocre events.

What was really wonderful to see was how the Latino community has come to embrace Cyclovia.  Joyce Kilmer Avenue in the heart of Spanish speaking New Brunswick was the center of activity and as a long time resident of the area it was great to see the people in the neighborhood truly embrace the event.  Unfortunately, the University community hasn't embraced the event quite as much but they are working on trying to get to college kids out and on the streets.


Overall, I was super impressed at the quality and success of this event.  It was clear to see Cyclovia acting as a elegant bridge between the communities and cultures that reside in the city.  As someone who has become very jaded at seeing one too many poorly executed bike and pedestrian projects here in New Jersey, this event and all the new bike projects going on in New Brunswick giver me hope that we might be turning the corner as to what is expected when planning and building for those who walk and bike here in New Jersey.

Anyway enjoy the photos.  There are many more after the break.

Read more »
Email ThisBlogThis!Share to TwitterShare to FacebookShare to Pinterest
Posted by Andrew J. Besold at 1:36 AM 1 comment:

On September 20th the body of 16 year old Giancarlo Taveras was recovered from the Raritan River after he jumped off the Route 35 Victory Bridge. The death of the teenager drew an outpouring of grief from the Perth Amboy community. As a result the annual suicide awareness walk over the bridge included more than 500 participants on September 28th. Then on September 29th a 19 year old miraculously survived his suicide attempt with a broken leg. That chain of events along, with pressure from the Mayor of Perth Amboy finally spurred NJDOT to do something about the issue. Their solution - set up barricades and close the bridge to bicyclists and pedestrians. Along with a vague promise to put up a fence for the walkway at some point in the future.

The bridge closure severs the only pedestrian and bicycle access between Perth Amboy and Sayreville. A 2 mile bike ride over the bridge is now a 23 mile detour via New Brunswick and a pedestrian's only option is to use the infrequent bus service that crosses the bridge.

We've seen this before.

One month after the September 11th attacks KYW TV Philadelphia news reporter Paul Moriarty (Yes the same Paul Moriarty that tried to ban quick release hubs) filed a report on the potential of terrorists to damage the Ben Franklin Bridge simply by accessing the walkway. Immediately after the report the Delaware River Port Authority (DRPA) closed the walkway to bicyclists and pedestrians. It was only after a concerted effort by the Bicycle Coalition of Greater Philadelphia that the authority reluctantly reopened the walkway two months later. The DRPA repeated this action in 2005 after the London Subway bombings with a 30 day closing.

It should be pointed out that simply closing this walkway and bike lanes will not diminish the opportunity for people to take their own life on this structure. The bike lane is really little more than a very wide shoulder allowing someone to park without disrupting traffic. There is no such accommodation on the adjacent Driscoll Bridge which carries the Garden State Parkway.  The press has only mentioned in passing that the the body of Anthony Sharpe Jr. who jumped to his death off the Driscoll Bridge was found on the same day that Tavaras was discovered.

Walk Bike Jersey agrees with MyCentralJersey.com's editorial that NJ DOT should make the construction of a fence an immediate priority.  For NJDOT the closure is a good choice from their perspective, as it it relieves the immediacy of fixing the problem. Imagine if the Turnpike Authority closed the Garden State Parkway while it considered options to fix the low barrier on the Driscoll Bridge.

Complete streets is more than simply implementing the routine accommodation policy that NJDOT has adopted. It is about the equitable treatment of all road users as a core value of the Department. Otherwise we can continue to expect knee jerk solutions which will result in more collective punishment for people who depend on sidewalks, trails and bike lanes on bridges to get to where they are going.

Email ThisBlogThis!Share to TwitterShare to FacebookShare to Pinterest
Posted by John Boyle at 1:01 PM 3 comments: