Local champions are key to making our first generation suburbs bicycle friendly. Case in point is Collingswood Streets founder Stella Bonaparte who has completed a bike lane evaluation study for the borough of 17,000 in Camden County. Bonaparte looked at the existing conditions and a history of bicycle crashes on Haddon Ave and Collings Ave as well as parallel streets such as Maple Street and found that bike lanes are indeed feasible on both Haddon and Collings. Bicycle parking and access to the PATCO High Speed Line was also looked at.
While this evaluation was only a feasibility study it deserves to be integrated into the County's growing list of local bicycle and pedestrian planning projects such as the Central Camden County Bicycling and Multi Use Trail Plan and the Camden GreenWay trails plan.
You can access the report on the Collingswood Streets website on the Livable Streets Network.

The intersection of Haddon and Collings Ave in Downtown Collingswood
Email ThisBlogThis!Share to TwitterShare to FacebookShare to Pinterest
Posted by Andrew J. Besold at 1:35 AM 1 comment: 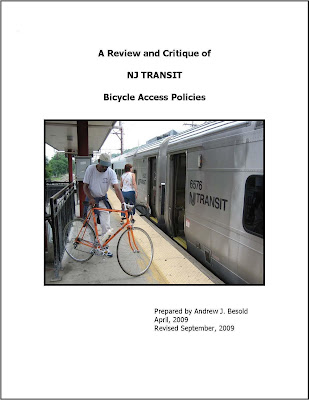 This report was prepared as a graduation requirement for a Master's Degree in City and Regional Planning at the Bloustein School at Rutgers University. It was written to help make the adequate service provided by NJ TRANSIT even better. Many of the ideas and observations in the report could easily be applied to other transit services.

This report is the sole product of the author with Prof. John Pucher providing editorial guidance.

NJ one of ten states without a Bicycle Friendly Community

New Jersey is one of only ten states still not represented by a Bicycle Friendly Community as designated by the League of American Bicyclists. Last month LAB released its list of new BFCs boasting that it added 15 new BFCs with five states being represented by a BFC for the first time.

For some perspective, every state in the Deep South and even Texas has at least one Bicycle Friendly Community, with Virginia, Florida, North and South Carolina represented by three communities or more. Even Mississippi has one (Oxford)!

Somewhat oddly, New Jersey is far from alone in the Northeast. New Hampshire, Massachusetts, Connecticut, Delaware and Maryland are all states without a BFC. The other four states are West Virginia, North Dakota, Nevada and Hawaii. However having just spent time up in Connecticut with other bike/ped advocates, I can tell you that they are likely to nominate at least one community next year.

If New Jersey has any hopes of maintaining it's Top 10 statewide ranking as a Bicycle Friendly State next year, it is clear that our state will need to pick up at least one, if not two or three Bicycle Friendly Communities by this time next year. Other states are starting to take the lead and we in New Jersey better start making progress on this very soon (applications are due Feb 19m 2010).

Possible candidates for easy nomination for BFC status are:
(Ranked by observed bicycle amenities that I've either read about or seen in person)
Of those Ocean City could easily have it in the bag and may even have enough to attain the higher ranking of Silver. In fact BFC is something that every shore town should be trying to achieve since it would be relatively easy for most and that providing bicycle amenities in beach communities has proven benefits.

The wild-card in the bunch is clearly Newark, however the Brick City Bicycle Collective has been making great advocacy inroads in the city and region in the short six months they've been around. They had Mayor Cory Booker ride with them on their inaugural ride back in August and even have some elected members of the city government now wanting to make Newark the most bicycle friendly city in all of New Jersey!

What are your thoughts? Do you have any suggestions for other possible BFC candidates in New Jersey?
Email ThisBlogThis!Share to TwitterShare to FacebookShare to Pinterest
Posted by Andrew J. Besold at 9:32 PM 7 comments:

National Report : 1 in 5 Traffic Deaths in New Jersey are Pedestrians

A new national report by Transportation for America and Surface Transportation Policy Partnership (http://t4america.org/resources/dangerousbydesign/) shows that 1 in 5 traffic deaths in New Jersey are pedestrians. The report finds:


121 pedestrians have been killed in traffic collisions alone this year, a 33% increase over the same period in 2008. Local advocates said future deaths are preventable if the state changes transportation policies and funding practices.

“New Jersey State Department of Transportation has made strides in directing more resources to pedestrian safety, but a recent uptick in fatalities proves that it still has a ways to go,” said Ya-Ting Liu, federal advocate of Tri-State Transportation Campaign, a non-profit policy watchdog organization. “The state could double its current federal allocation on pedestrian safety and it would still be spending less than it costs to buy a coffee from Starbucks per resident. This small investment will save lives and improve quality of life.”

The advocates called on New Jersey Department of Transportation, Governor-elect Christie and the State Legislature to:


“This report shows how we are systematically failing a large percentage of our population by designing roads without the needs of all users in mind. NJ needs a Complete Streets policy to ensure that roads are safe for all users, not just those behind the wheel,” said Peter Kasabach, Executive Director of NJ Future.

“Despite the grim statistics some officials still believe that traffic flow is more important than bicycle and pedestrian safety. It's time to put the most vulnerable road users at the top of the priority list by setting a goal of reducing bicycle and pedestrian traffic deaths by strategies that include traffic education, engineering and enforcement,” said John Boyle, Advocacy Director for the Bicycle Coalition of Greater Philadelphia and founding board member of WalkBikeJersey.