In a stunning Op Ed piece in the Star Ledger. NJ DOT Commissioner James Simpson reaffirms the Christy Administration's commitment to complete streets. The Commissioner goes on to cite pending and recently completed projects, including the proposed road diet of Route 71, which is the Main St for several Monmouth County Beach Communitie and the Department's crown jewel - the Ocean City Causeway, which is already beginning to see a major return on investment. He also talks about the equally important task of bringing counties and municipalities on board with their own complete streets policies, because chances are that when you walk out of your front door you will be on a local street. We agree, when it comes to complete streets NJ DOT is walking the walk.

The Commissioner notes in his editorial that complete strategies are being implemented on Route 35 such as ADA curb ramps, continuous sidewalk and pedestrian countdown signals, however when it comes to bike lanes he becomes more ambiguous.

Incorporating accommodations for bicyclists is more of a challenge because the department is not purchasing land from private property owners to widen Route 35, and it does not have the funding to do so. However, the department and its design teams are creating plans to improve accommodations for bicyclists within the existing right-of-way where feasible, and will be discussing these ideas with local communities in the coming weeks and months.

This is what project managers have been telling Complete Streets advocates since the spring, yet public meetings have been held and comments have been submitted by hundreds of citizens. But in mid August the construction contracts were awarded without provisions for bike lanes. The Commissioner is advising the public that it is too early to expect design plans for bike lanes, but the actions of the DOT suggest that the t's are crossed and the i's are dotted on this project.

What's disheartening about the whole process is the missed opportunity to create a first class bikeway from Point Pleasant to Island Beach State Park. While there are major challenges on the north end they are not insurmountable and farther south we were able to fit in a protected bike lane using Streetmix for the Lavallette business district without making any changes to the parking configuration (head in angle parking on both sides of the street). Compare it to the cross sections that NJDOT is implementing.


Clearly, there is available road space along most of the route to add bike lanes without impacting private property or taking existing parking from businesses.We know the leadership at NJDOT and its skilled staff can combine its Complete Street expertise with practical application to find a way to safely accommodate bicyclists along Route 35.

Email ThisBlogThis!Share to TwitterShare to FacebookShare to Pinterest
Posted by John Boyle at 10:03 AM 2 comments:

The blog Cycling International based out of New York City, reported on Sunday that a Queens woman died on Friday after receiving injuries sustained in a crash while descending from Alpine on Henry Hudson Drive.  This roadway is in the New Jersey portion of the Palisades Interstate Park and is a very popular alternative to cycling on much busier 9w.  This would appear to be one of those rare and still tragic circumstances where a cyclist was killed and a motor vehicle WAS NOT involved.  Over the past 6 years that WalkBikeJersey has been publishing we can only recall one other crash in New Jersey where a cyclist died from injuries sustained in a single vehicle crash (internet search returned nothing).  That other crash is remembered as having also involved a high-speed descent in a park.  No matter the cause, the death of a cyclist is always very sad and somber, and the hearts of the entire New Jersey cycling community go out to the family of the fallen.

Follow the link for the complete story in Cycling International.

Bicyclist Killed By Motorist On Route 10 in Succasunna

According to NJ.com a bicyclist was killed on Route 10 west near Main St just before the Route 46 merge in the Succasunna section of Roxbury Township. The article gives few details other than the crash occurred at 11 PM and the motorist was not charged.

We have seen this scenario many times before - a bicyclist killed after dark on a state highway and while there may be many factors the obvious constant is the configuration of Route 10.


Old School Traffic engineers can give you 50 reasons on why this design is a necessity, but not one of them would be to enhance the safety of the non motorized road user. Lets hope that when Route 10 is resurfaced or rehabilitated that DOT employs complete streets solutions.

And here is my final thought - if the victim was killed by a single engine aircraft landing on Route 10 the NTSB would be conducting a year long investigation. Think of the amazing success that NTSB has with airline fatalities and the continuing failure of our highway system to reduce bicycle and pedestrian fatalities.

Our thoughts and prayers go out to the family of the victim.
Email ThisBlogThis!Share to TwitterShare to FacebookShare to Pinterest
Posted by John Boyle at 7:10 AM 6 comments:

Harvey Cedars Mayor and Residents Fight for "3 iN HC"

2013 seems to be the year that established Ocean and Monmouth Counties at the forefront of the New Jersey's complete streets movement. It has dominated the news on this blog with Routes 72, 35 and 71 proving to be a litmus test of NJ DOT's complete streets policy.

And now many residents in Harvey Cedars want to do the same for Long Beach Boulevard, Last year the borough adopted their own complete streets policy and are backing their new policy with a campaign dubbed 3 in HC which seeks to reduce the number of lanes on the boulevard from 4 lanes to 3.

Unfortunately the tiny borough has faced opposition from the County which maintains Long Beach Boulevard and lacks a complete streets policy. But its the neighboring communities - Barnegat Light and Long Beach Township that have voiced the loudest opposition. You may remember that in 2010 Mayor Mancini of Long Beach Township sought to repeal the stop for pedestrians law saying that such a law wouldn't work on a 5 lane road.

Once again the Asbury Park Press is documenting the complete streets movement on video with highlights from the Ocean County Freeholders meeting, where supporters traveled 30 miles to get pooh poohed by the Freeholders and, you guessed it, Mayor Mancini. Who was proud to tout a petition that opposes reducing lanes on Long Beach Blvd. The petition states among other unfounded arguments that "Any perceived danger to pedestrian and bicyclists is hypothetical.".

Kudos to Harvey Cedars Mayor Oldham and his supporters for their 3 in HC campaign. Long Beach Township may be neighbors with Harvey Cedars but they are at opposite ends of the ideological spectrum when it comes to livable communities. Its clear that complete streets advocates have lots of work to do to win the hearts and minds of Long Beach Island residents and businesses. A resort with poor pedestrian facilities and no public transportation.

View Larger Map
Email ThisBlogThis!Share to TwitterShare to FacebookShare to Pinterest
Posted by John Boyle at 9:00 AM 2 comments:

Complete Streets has a powerful ally in New Jersey - The 1.3 million state residents who are members of the AARP

Why is AARP interested in promoting complete streets? Because safety and quality of life is part of the AARP's core mission. In NJ between 2009-2011 31% of the pedestrians killed were over age 60 even thought they represent only 19% of the population the numbers for pedestrians over 75 is even more pronounced - 13% of all fatalities and just 6.7% of the population.

In NJ AARP supports NJDOT's complete streets policy by hosting a statewide Complete Streets Task Force which includes a broad spectrum of stakeholders including bicycle pedestrian advocacy groups, transportation management associations, county and private sector planners as well as NJ DOT. AARP is now mobilizing their members to advocate for complete streets policies in their own towns. If you are a member of the AARP and would like to lend your support to the campaign then click here to become a member of AARP's Complete Streets Action Team.

Email ThisBlogThis!Share to TwitterShare to FacebookShare to Pinterest
Posted by John Boyle at 11:21 PM 4 comments:

Asbury Park Press reporter Larry Higgs found a lot of supporters for bike lanes on Route 35. Watch the video here or click on the image. 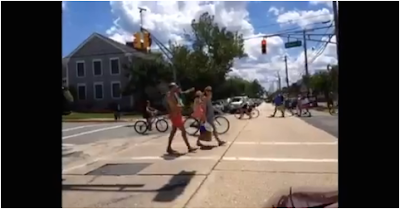 Email ThisBlogThis!Share to TwitterShare to FacebookShare to Pinterest
Posted by John Boyle at 3:04 PM 10 comments: