Two Killed on a Bicycle In Lake Hiawatha

From the Star Ledger
Car strikes and kills 2 co-workers on bike
Monday, June 30, 2008

Two men who worked at Outback Steakhouse in Parsippany were struck and killed Sunday morning while riding their bicycle, according to authorities and management at the restaurant.

The victims were struck on 771 Knoll Road, in the Lake Hiawatha section of Parsippany, at 12:10 a.m., said Police Chief Michael Peckerman and the Morris County Prosecutor's Office.

The men, described as two Hispanic males, were riding on a single bicycle through the semi-wooded area, and died at the scene.
Email ThisBlogThis!Share to TwitterShare to FacebookShare to Pinterest
Posted by John Boyle at 7:04 AM 1 comment:

You seen these intersections all over suburbia, unmarked crosswalks, poorly placed access ramps and mostly intersections that are impossible to cross safely.

The West Windsor Bike Ped Alliance along with a slew of volunteers at McGraw Hill performed crosswalk inventory for 199 intersections in West Windsor Township.

The goal was to evaluate the intersections for 17 different criteria to determine if it was an acceptable intersection. Criteria included such items as missing crosswalk, crosswalk faded, curb cut missing or too steep, and walk signal non-functioning. Each team was given an evaluation sheet to fill out for each intersection.

The WWBPA plans to enter all of the information and then determine what level of information is needed to prioritize the data. In general, intersections closest to pedestrian generators will be a higher priority. It is hoped that once the process is complete then it can be replicated in other communities.

Shore Towns Need To Do More For Bicycles

In the Wildwoods (North Wildwood, Wildwood By The Sea, Wildwood Crest and West Wildwood) bike traffic exceeds car traffic on weekday nights. Lights and helmets are so rare that obnoxious car passengers often yell comments at the cyclists that are using lights and wearing helmets.

The resort's service workers are generally composed Foreign Exchange students from Eastern Europe and Southeast Asia as well as the local Hispanic population and all rely on used bicycles. So what are shore communities doing to make them bike friendly? Very little and what little is done is very substandard.

This is not a problem confined to the Wildwoods, the same can be said resorts along the Jersey Shore. Lots of bikes with very few amenities. 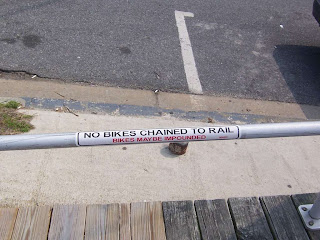 No Bike parking is provided on the Wildwood Boardwalk, and there are regulations that ban bikes from locking to the boardwalk railings, but the many bicycle dependent employees park to the railings simply because there are no other options. 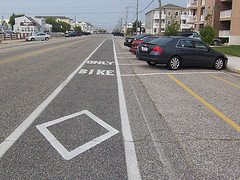 Surf Ave, has the only marked bike lane in the Wildwoods, but its location in proximity to angle parking and the outdated road markings make these bike lanes clearly substandard. In order for this bike lane to work the parking needs to become back in angle parking and modern bike lane paint and signage are needed. 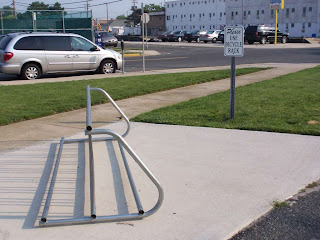 A couple of men with a truck could literally take away this unsecured bike rack with bikes attached without any tools. Perhaps 90% of the racks on the island are set up this way. 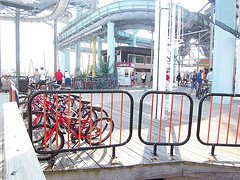 Bike Racks at Morey's Pier Raging Waters demonstrate the importance of the bicycle for transportation at the shore. 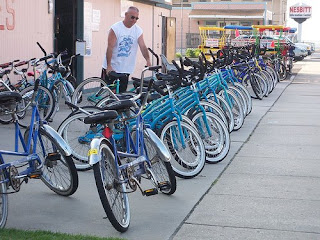 Hourly bike rental places provide instant access to tourists who wish to ride on the boardwalk or the adjacent multi use paths to the north and south.

Wildwood By The Sea which is the commercial center of the island is perhaps the most hostile place on the island to bicycle. The city has no bike lanes and the north-south thorofares are nearly all 4 lane roads with no shoulder.
Email ThisBlogThis!Share to TwitterShare to FacebookShare to Pinterest
Posted by John Boyle at 11:37 PM 2 comments:

Construction of the D andR Canal is well underway. The project extends form Lalor St in Trenton down to the RiverLINE rail bridge over the Crosswicks Creek in Bordentown City.

An exploration of the south end of the project shows that the grading and gravel is complete. What still needs to be done is the construction of a bridge and a short section of trail to connect the towpath to the railroad bridge.

The D&R canal and the new towpath trail near Crosswicks Creek.
Email ThisBlogThis!Share to TwitterShare to FacebookShare to Pinterest
Posted by John Boyle at 5:10 AM 1 comment: