The Bicycle Coalition met with officials of the Delaware River Port Authority (DRPA) last week to receive details of the plan for the Bicycle Pedestrian Ramp project on the South Walkway of the Bridge as well as the Pearl St project which will offer bicycle and pedestrian improvements from the walkway entrance to the river. Pearl Street is one of three Camden TIGER projects sponsored by the Coopers Ferry Development Association.
Pearl Street Project
DRPA put up $100,000 to design the streetscape and roadway. The project calls for new signage, belgian block sidewalk and lighting improvements and sharrows on the roadway. Final design is within days of completion and construction is scheduled to begin in April 2011 and is expected to be completed within 6 months. The other Camden projects Pine St and MLK Blvd are expected to be completed simultanously and these 3 projects should be among the first TIGER projects to go under construction.
Bicycle and Pedestrian Ramp
As we reported earlier pending board approval DRPA is budgeting $50,000 in 2011 for the design of the ramp, while there was an original 2011 committment of $100,000 for the 2011 capital budget DRPA Chief Acting Engineer Michael Venuto explained that the 2011 schedule only required half that amount for the fiscal year. The rest of the design work, which is expected to take about 7 months will be completed in 2012. Construction is expected to begin around November of December of 2012 with completion scheduled in the Spring of 2013. The South Walkway will have to be closed during the six month construction project. Total project cost is estimated at 3.3 million dollars.
The bottom line-Nothing but good news from the DRPA, the construction of the ramp now appears to be a certainty. The Port Authority should also be commended for stepping up and offering their expertise to develop the plans for the first bicycle facilities in Camden. 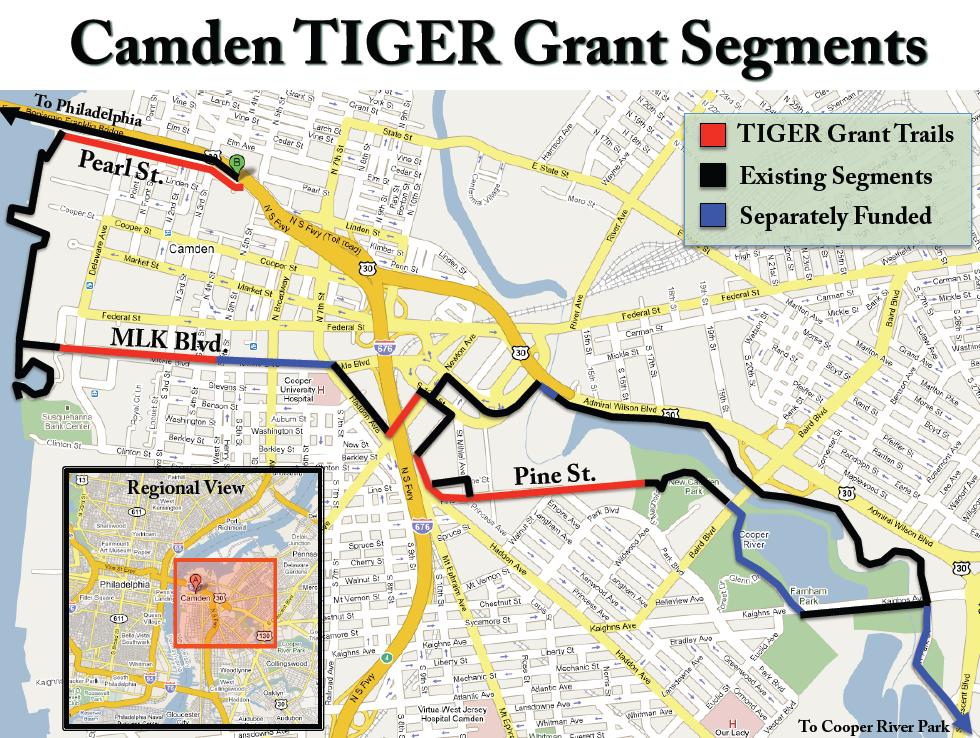 Email ThisBlogThis!Share to TwitterShare to FacebookShare to Pinterest
Posted by Andrew J. Besold at 1:43 AM

The DRPA plan calls for new signage, belgian block sidewalks and lighting improvements for the roadway and bike and pedestrian ramps. I think it would be great if this improvement project led to more Construction projects in Pennsylvania. With today's economy, everyone I know in the construction industry could use some help. Luckily, I recently stumbled onto a really valuable resource in Dodge Projects. They have some amazing job listings, which have actually been sorted by type and state, so you can quickly find the jobs that are right for you. In addition, they are detailed enough to put you on the right track. I would definitely recommend taking a look.