City Bike Plan Is Accused of a Neighborhood Bias
(Leaders in poorer neighborhoods upset that more bike lanes NOT coming to their parts of town) Chicago News Cooperative via The New York Times ● Saturday, October 15, 2011

I just stumbled across this excellent website, VideoTrailReviews.com which gives web viewers exactly what the title advertises; great video reviews of the mountain bike trails on the East Coast but mostly here in New Jersey.  Manny Lugo, the creator of the website and most of the short films on the site, focuses primarily on hot spots for mountain biking but there are some exceptions.

I found the videography and editing to be superb and pretty much on par with the more famous Streetfilms.  While this is in part due to the amazing capabilities of the small, new helmet mounted cameras, it is also obvious the Manny knows how to get the most out of this and the rest of his equipment.  The "rider's eye" shots are very well composed and really capture the essence, pure speed and thrill of biking sweet New Jersey singletrack.  You really feel like your on the bike, threading your way through the trees!  Plus, his highly professional post production and choice of background music make for great fast pace entertainment.  Before you know it, the two to three minute videos are quickly over and you are left wanting more or better yet, wanting to get out on the bike even if it is 2am in the morning!

Here are two examples of Manny's work at VideoTrailReviews.com:

Email ThisBlogThis!Share to TwitterShare to FacebookShare to Pinterest
Posted by John Boyle at 3:55 PM 2 comments:

Late last month Folk Engineered, New Jersey's only bicycle makers, made the long trip Portland to participate in Oregon Manifest.  Billed as "A competition to design and build the ultimate modern utility bicycle," the event attracts the nation's and the world's best bicycle artisans such as perennial bike show winner Tony Pereira and industry icon Chris King and is Cielo Bicycles.  Being true to their unwritten mission to give back to the City of Newark that is their home, Ryan and Marie teamed up with some of the kids from the Discovery Charter School to produce their utilitarian entry.

While they did not win, just being invited to the competition is quite an honor in itself.  Making it all the way out to Portland, Oregon with the participating students and a beautiful bike in tow, surely had to be all the reward they needed.  Ryan and Marie, who are married, always have a glow about them as it is clear that they have found their callings in building beautifully crafted bicycles in Newark and sharing their passions and talents with the kids of the Brick City whether at the the Discovery School or at the newly opened Newark Bike Exchange (more on that soon on WBJ).

For more about Folk Engineered's entry with many more pictures (and a number of their other projects) see the following links (1, 2).

Our cycling caps are off to Folk Engineered and the kids of the Discover Charter School for representing Newark and all of New Jersey at this highly regarded bicycle industry event.
Email ThisBlogThis!Share to TwitterShare to FacebookShare to Pinterest
Posted by Andrew J. Besold at 8:55 AM 1 comment:

Why were 3 Wayne boys crossing Rt 46 on a train trestle?

Simple!  There is absolutely no other way for the kids to walk or bike between the area neighborhoods and towns.

If you haven't heard, over the weekend two boys were hit and killed by an NJ TRANSIT train and another injured as he jumped off the trestle bridge to avoid getting hit (Read the informative and well written article from The Star-Ledger).  This tragedy happened at where I 80, NJ 23 and US 46 all intersect.  This interchange is locally know as the "Spaghetti Bowl" due to its seemingly endless and dizzying expanse of twisting, turning off-ramps and clover leaves.  Unfortunately this interchange was built in an era when no consideration was given to the needs of pedestrians or bicyclists looking to travel between the surrounding neighborhoods.  Even more unfortunate, at least one of the possible alternative crossings was given a major renovation within the past 15 years with nary a consideration given for anything other that the efficient flow of motor vehicle traffic.

If you take a close look at the above map I prepared, you can see that there are no practical routes for miles around for non-motorized road users looking to travel north or south over both I 80 and US 46 anywhere near the NJ 23 corridor.

The Camden County Bicycle and Multi-Use Trail Master Plan will identify both on-road bike routes and off-road trail locations that together will create an interconnected trail network from Winslow and Waterford to Camden and Pennsauken and all municipalities in between. The plan is being completed in four phases, and public input is requested.

A public meeting on the plan will be held on Wednesday, October 5th, 2011

The Plan is considered a companion to the Camden County Open Space and Farmland Preservation Plan in that it makes maximum use of the greenways identified in that plan for future off-road trails thereby providing residents with access to publicly owned green space.

Phase I of the Plan, covering ten central Camden County municipalities, has been completed, while Phase II, involving an additional 13 municipalities is nearing completion. Phases III and IV will be completed simultaneously over the next eighteen months by the Delaware Valley Regional Planning Commission. Once all phases are completed, they will be presented to the Camden County Planning Board for incorporation into the County’s Master Plan.

During the development of each phase of the Plan, the input of local municipal officials and the public has been, and is being, encouraged. Project Teams consisting of one or more locally appointed individuals have been formed to guide the process offering insight into local points of interest, trail/route impediments, and possible solutions to those impediments. 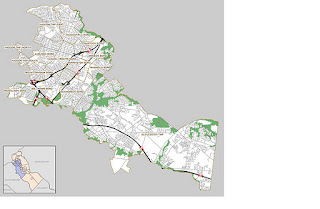 
Email ThisBlogThis!Share to TwitterShare to FacebookShare to Pinterest
Posted by John Boyle at 12:02 PM 3 comments: