This past Monday, representatives from Michael Baker Jr. Consulting presented their draft bicycle and pedestrian plan for Freehold Borough before the general public and Borough Council. This meeting brought out a large number interested people, so much that they had to move the public presentation from a small conference room to the larger Council Chambers. Included in the roughly 25 attendees were some heavy hitters in New Jersey bike/ped advocacy including Jim Nicholson, President of the NJ Bike & Walk Coalition, Ann and Mike Kruimer, New Jersey representatives for the East Coast Greenway Alliance (ECGW), Wally Tunnison who has been instrumental in the development of the Henry Hudson Trail and yours truly of WalkBikeJersey. Along with all the state and regional advocates, there were a large number of local residents who attended the meeting including David Metz of the Metz Bicycle Museum who was also there to receive a proclamation of appreciation from the Borough upon his 95th birthday (Happy Birthday Mr. Metz and long live your museum!). Just about all who were in attendance at the meeting were in support for better bicycle amenities in Freehold Borough.

Overall, the plan presented by the consultants from Michael Baker Jr. was well thought out and clearly showed an understanding of the needs of bicyclists and pedestrians. Freehold Borough is a small, older town roughly 1.5 miles square that is the County Seat for Monmouth and is the crossroads of many old highways that still bring a great deal of traffic into town. Similar to the plan they put together for Morristown, the suggestions for Freehold also included a liberal use of bicycle lanes and sharrows on major streets where appropriate, accompanied by a reduction in motor vehicle lane width and limited elimination of on-street parking (the one street that they recommended this last action, they never observed cars parked on the street). They also suggested extending the Henry Hudson Trail further into town using the old railroad right-of-way, which is currently not used and has been the sight of rampant dumping. 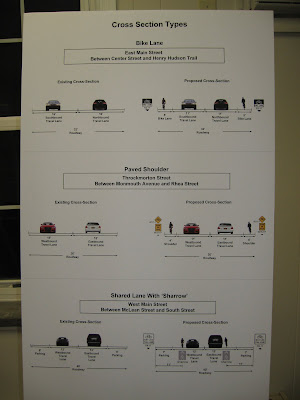 For pedestrians suggestions included construction of sidewalks in places without them, particularly in areas that have significant evidence of pedestrian use as seen from direct observation and the existence of desire paths on the side of the roadways. Also suggested was the construction of one or two additional crosswalks on a section of downtown Main Street that had no crosswalks over a stretch of approximately 800 feet.

Bicycle parking oddly enough has been probably been the most contentious issue in Freehold. As WalkBikeJersey has reported in the past, Borough ordinance requires bicycle to be parked only to official bicycle racks, however almost all of those are located in the parking lots behind buildings and in other areas not readily apparent to bicyclist. Most locals feel that these racks are not located in safe places to lock a bike. Despite general opposition from many downtown merchants, the proposed plan does call for bicycle parking be placed in select curbside locations on Main Street, which follows the bike parking standards detailed by the Association of Pedestrian and Bicycle Professionals. However, if a curbside parking plan cannot be ratified by the Borough Council, the consultants did provide a “Plan B” bike parking proposal that would provide better parking options if bicycle parking is still not allowed along the Main Street storefronts. 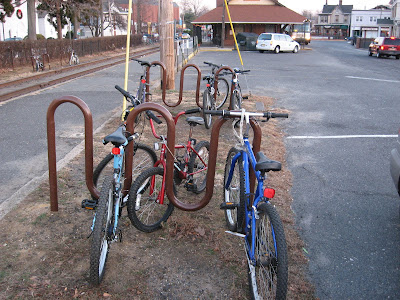 Bike parking in a back lot near the old train station which is now a bus stop.

Probably the most unique part of the plan (and undoubtedly the coolest) was the bicycle map of the Borough that included a Bruce Springsteen bicycle tour. Freehold Borough has many historic sights due to its 300+ years of history and its close proximity to the Revolutionary War Battle of Monmouth (were a newly trained Continental Army proved it could go tow-to-tow with the British and the legendary Molly Pitcher took command of cannon post when its male soldiers were wounded). Still, Freehold is known the world over for being the birthplace of Bruce and there are many sights around town associated with “The Boss.” While there are eight other historic sights and places of interest in the Borough, there are nine sights uniquely associated with Springsteen and the proposed bike map points them all out.

Also of note was that this plan looked at important destinations beyond the Borough boundaries. With cooperation from Freehold Township that surrounds the Borough, the consultants considered the needs of bicyclists and pedestrian that would like to visit sights like Monmouth Battlefield State Park and other nearby county parks. Also investigated were the needs of people who would need to travel back and forth to a select number of commercial establishments that lay just beyond the Borough.

During public comment everyone who spoke showed support for the plan, including all the local residents many of whom use their bikes as a regular means of transportation around the town. When Mike Kruimer of the ECGW spoke, he applauded the proposed plan and reminded the Council that there are many great amenities in their town to attract bicyclists such as the Henry Hudson Trail and the world-class Metz Bicycle Museum. Mike also reminded the Council that when he comes to town on his bike he doesn’t bring loud music or a loud car but he does bring his wallet, as he pulled it out of his pocket and waved it before all in attendance. Other bicycle advocates from outside the Borough, including myself, praised the plan for being well thought out and a great opportunity for Freehold.

Unfortunately, I needed to leave before the Council saw the presentation for themselves and could begin debate on the bicycle plan. A reporter from the Asbury Park Press was there to cover the story and you can read her coverage here.
Email ThisBlogThis!Share to TwitterShare to FacebookShare to Pinterest
Posted by Andrew J. Besold at 1:08 PM