If you didn’t get the chance to make it down to Philly last weekend to attend the Bike Expo, you missed out on a very well run event and a great time. Sponsored by both the Bicycle Coalition of Greater Philadelphia and Bilenkey Cycle Works, the Bike Expo attracted hundreds of attendees on Saturday alone when I was there. The 23rd St Armory was a really cool venue that had just enough room to accommodate the 50 or so vendors. For those that arrived by bike, the local kids from Neighborhood Bike Works (a program that teaches Philly youth work and mechanical skills as well as the joy of cycling) did a professional and friendly job providing guarded, valet bicycle parking just feet from the Armory entrance.

Of the vendors in attendance there were at least a dozen or so custom bicycle manufacturers, two midsized production bike manufacturers (Fuji and Jamis), several clothing producers, a retailer specializing in bicycle touring equipment, one of Philly’s most notable and funky bike shops, plus many others. Advocacy groups were also present including the Pennsylvania rep for the League of American Bicyclists (who gave out tons of everyone’s favorite bicycle pins), Josh from the PA Walks and Bikes (who said a bunch of New Jersey cyclists visited his booth – hint, hint) and of course the BCGP. The event also had a number of informative seminars throughout the day but I got so rapped up in exhibit hall that I never had a chance to attend any of them to my detriment.

Of the custom bike manufacturers in attendance there was one small husband and wife team there representing good ol’ Jersey. Folk Engineered is a newer operation run by Marie and Ryan bringing bicycle manufacturing back to New Jersey and in the heart of Newark. The duo were participants in my inaugural Biergarten Bike Ride and are both formally trained artists from Rutgers University that found the bicycle to be their preferred medium of expression. They did a good job attracting attention to their booth with their bikes and a hand-built small porter rack that is perfect for transporting a 6-pack of beer along with a U-Lock which they demonstrated in front of ogling eyes (I don’t know what they were lusting over more, their bikes or the 6-pack of beer!). 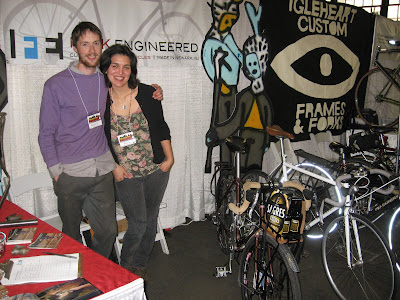 Ryan and Marie at the Bike Expo. Look at that 6-pack!
And the rack and bike attached to it.
Also representing New Jersey was lighting giant, Princeton Tec. Headquartered not far from Philly in Bordentown, Princeton Tec had a highly visible (pun intended) presence at the Expo. I ended up talking to Gerard Armendinger about the company’s presence in New Jersey and their operations. Being a big fan of “Made in USA” products I was pleasantly surprised to hear that Princeton Tec produces around 80% of their items right in their Bordentown location, something they are VERY proud of (see their homepage). They even would like make more of their items in-house to have a better control on quality and to eliminate lag times getting new products to market but they were having a difficulty finding skilled machinists and die makes here in New Jersey which is a real shame. Still, it was really nice to hear of a company’s commitment to domestic production and it’s even better when that product is “Made in Jersey!” 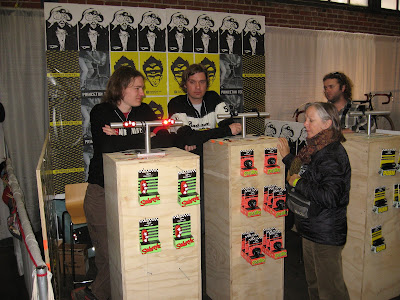 The "bright" guys at the Princeton Tec Booth.
I almost forgot! There was one other New Jersey manufacturer at the event. Bandbox Helmets of Lebanon, NJ. I first briefly reported about them earlier in the year at the inaugural South Orange Tweed Ride. Dr. Cheryl Allen-Munley told me that the goal of the company is to produce helmets that look like stylish hats instead of the typical race inspired products on the market today. They told be that since I last saw them earlier in the spring the learning curve in their product development has been very steep. They had to ditch the idea of using Styrofoam found in 99% of helmets and are instead using a soft, pliable yet firm gel-like product used by NASA for its shock absorbing properties. Using this material they have been able to pass the required crash tests while keeping the underlying helmet size down so that the product looks like a normal sized hat. The prototypes they had on display were interesting. The concept seemed to work better in the women’s styles they had on display but they haven’t yet finalized their final production model at this moment. Still, they are in the final stages of product development and hope to have their product going out to retailers this coming Spring. 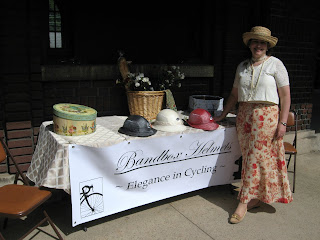 The elegant Dr. Allen-Munely at the South Orange Tweed Ride last Spring.
Finally to cap things off (no pun intended this time), I even won some swag worth over $200 from the really fun and innovative raffle that helped support the BCGP. The coalition folks had a large number of items donated to them to raffle away. They then put these items into twenty different groupings. Participants then were able to look over the items in each group and could then put their ticket stubs in bags that corresponded with the group of items they were interested in winning. This worked out great since this system precluded participants from winning items intended for the opposite sex, or stuff they just didn’t need. From one of the groupings that I put my tickets in I ended up scoring some desperately needed new sunglass from Serfas, knee-high socks from Sock-Guy and a really sharp and stylish black cycling jacket made by Sheila Moon of San Francisco. Woo hoo!

Overall, the Bicycle Coalition of Greater Philadelphia ran a superb event that from my perspective was a rousing success (I hope their accountant says so too). And since the Armory was close to capacity for the number of vendors they had this year, I can only imagine that the Bicycle Coalition will have to move the event to a larger venue next year. Way to go BCGP!
Email ThisBlogThis!Share to TwitterShare to FacebookShare to Pinterest
Posted by Andrew J. Besold at 4:58 PM

How to get your Child into Modeling, Acting & Commercials?

Once in a Lifetime Opportunity!!! Is your child the next BIG TV star? Meet Top Industry Talent and Modeling Agents and Scouts at the Just 4 U Kids Expo on June 22nd in NJ. Agents and Scouts are auditioning many talented kids on the SPOT for paid assignments including Commercials, TV Sitcoms and NYC Kids Fashion Weekend. Be there!! Don’t miss a great opportunity to showcase your celebrity child. For more information visit http://www.just4uexpo.com/

I ordered these cycling bike pants from Bizarkdeal for my brother who is an avid bicyclist! They fit great, he said they are super comfortable, and the best part is they are quick to dry, unlike some other cycling suits he has tried! Highly recommend these!