Op-Ed: What should a statewide bicycle map have? 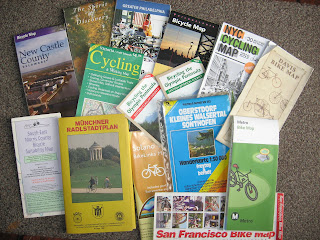 So last week I posted a general notice about NJDOT’s public forums to get some feedback in their efforts to put together a statewide bicycle map. This project leaves me very excited since I love maps and will even confess to having over 100 in my collection. I read maps like people read books, plotting adventures and rides many of which, unfortunately, will never come to pass.

As for bicycle specific maps that I’ve seen, results seem to be hit or miss. Some of maps are excellent, a number are mediocre but still useful, while others are downright useless for navigating by bike and aren’t worth the paper they are printed on. From decades of map use to travel by bike here in New Jersey, elsewhere around North American and in Europe, I would like to suggest some ideas that I feel are critical in producing a quality New Jersey Bike Map:
From what I’ve seen of the draft New Jersey bike map, NJDOT and its consultants are off to a good start. Still, they must remember that there are already plenty of other good map sources that this map will be competing against. Google Maps with its “Bike There” instructions has shown itself to be a very useful tool and Map My Ride will even calculate vertical profiles as it maps your ride. As for printed maps however, I still find myself grabbing for my Hagstrom and ADC county maps over any county bicycle map published for a New Jersey county so far (the new Mercer County bike map is really good but it’s only an online source as far as I know). Still, I have high hopes for this map project and look forward to the final product.
Email ThisBlogThis!Share to TwitterShare to FacebookShare to Pinterest
Posted by Andrew J. Besold at 8:31 PM

I'm surprised you haven't been mentioning Dustin Farnum's excellent NJbikemap.com. Aside from cartographic beauty, it meets almost all of your requirements, and has to be the best resource for New Jersey cyclists at the moment. I think it's a good model for pushing cyclists towards smaller roadways, even if they don't have a wide shoulder.

I was just talking to Dustin the other day at Efinger's about this project. His map is an absolutely mind-boggling amazing project that New Jersey cyclists are very lucky to have for free. He does stuff an incredible amount if information on his maps.

However, I personally do not always agree with his road ratings. I think a more independently objective system is needed than just one person's gut feelings which is why I suggest using an empirically acquired data on traffic volume. I think it is also important for cyclists to know if a road with heavy traffic has shoulders which is something his map does not currently show.

Still, I totally agree with you Ben. Dustin's maps are a fantastic resource and set the bar VERY high for NJDOT if they have any hope to do any better. I'm confident that Dustin's high standard will just about require NJDOT to go for the Gold on this project. For that we should all thank him.

No pressure, Liz ;) if your reading this.