Yesterday's the Delaware River Port Authority (DRPA) put their 2010-2014 Capital Program into the sunshine on at a public meeting and on their website. Included in the year of 2012 is 3.2 Million Dollars for an ADA accessible ramp on the Camden side of the Ben Franklin Bridge (south walkway). Previous 5 year Capital Budget programs included the ramps but placed it in "Later Years", a category which serves as a placeholder for long term (and often unfunded) projects.

We commend DRPA for prioritizing the bridge walkway. We hope that design and construction happens in a timely manner. The Bicycle Coalition is willing and able to provide technical assistance and to promote public outreach of this important bi-state connection. 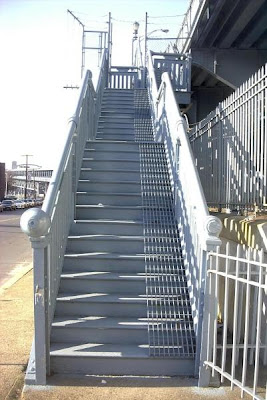 John asks: Is my morning bike schlep/cardio workout at risk?
DRPA plans to replace these steps with a ramp in 2012.
Email ThisBlogThis!Share to TwitterShare to FacebookShare to Pinterest
Posted by Andrew J. Besold at 6:31 PM