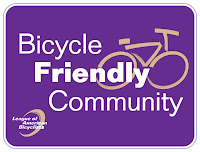 Congratulations go to both Hoboken and Ocean City in joining West Windsor.  We at WalkBikeJersey knew long ago that you had it in you and hope that more New Jersey Communities are inspired by your accomplishments.
Email ThisBlogThis!Share to TwitterShare to FacebookShare to Pinterest
Posted by Andrew J. Besold at 12:35 PM