Op-Ed: Proposed bike/ped improvements for a new Rt 72 LBI bridge leave much to be desired

NJDOT recently released its environmental assessment of the reconstruction of the Manahawkin Bay Bridge which carries NJ Route 72 over to Long Beach Island. The Manahawkin Bay Bridge is actually a series of four bridges and three islands than span 2 miles from the mainland to LBI. Today there are absolutely no accommodations for pedestrians nor bicycles over the current bridges. The entire length of this bridge and its approaches on either end are considered to be structurally deficient and functionally obsolete which means they need either major repair or replacement. As such NJDOT is proposing a complete overhaul and rebuilding of this span that will even include the construction of completely new bridges to the south of the current structure for a portion of the crossing.

Route 72 Manahawkin Bay Bridge
View Larger Map Source: Google
Unfortunately, while still a preliminary proposal, the suggested bicycle and pedestrian improvements seem grossly inadequate in a age of enlightened NJDOT with a Complete Streets Policy. While from a strictly engineering perspective the preliminary proposal may seem minimally sufficient at best, the functional reality is likely to be much less.

The preliminary proposal calls for pedestrians to be accommodated with a 6 foot wide sidewalk on the north side of the bridge (west bound) that is interrupted on Bonnet Island (the large center island), where pedestrians would then walk on what is already today "Old Rt 72". No sidewalk would be provided on this stretch. Under several of the bridge foundations, the sidewalk would continue under the bridges to provide access to the south of the roadway. For a map showing all the details of the proposed pedestrian access plan see this rendering.

A six foot wide sidewalk is rather narrow for a bridge the spans 2 miles with its longest bridge section a half (0.5) mile across. Also, the proposal does not call for the sidewalk to be separated from the shoulder of the highway by any barrier or divider. It would seem that this proposal meets the bare minimum of what is considered acceptable pedestrian access. The very nature of the proposed pedestrian facilities are far from ideal and seems to provide the most hostile pedestrian environment possible while still providing pedestrian access. Also, the proposed accommodations for bicyclists are also far from ideal (more below). As such cyclists will likely ride on the sidewalk, which at only six feet, is an inadequate width to accommodate both bicyclists and pedestrians. Finally, it does not appear that any provision has been made to allow pedestrians to cross to the southern side of Cedar Bonnet Island which has residences on both sides of the highway.

Bicyclists are proposed to be accommodated by use of the roadway shoulder and bike lanes. On the eastern side of the project NJDOT proposes to refurbish the existing two eastern most bridges where bicyclists would be accommodated by two 5 foot wide bicycle lanes; one in each direction. In the western portion of the project over the main part of the bay NJDOT has accepted the proposal to build two parallel bridges just to south of the existing bridge and then to rehabilitate the old bridge after the new one is completed. Here bicyclists would be accommodated with a 13 foot wide shoulder. 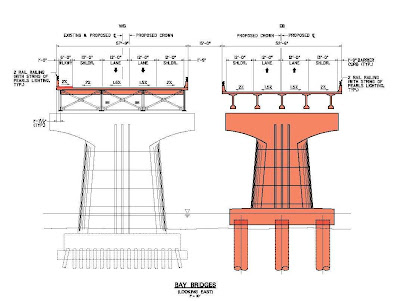 Cross section diagram of the proposed final build of the western two bay bridges.
The bridge to the right represents the new span: Source NJDOT 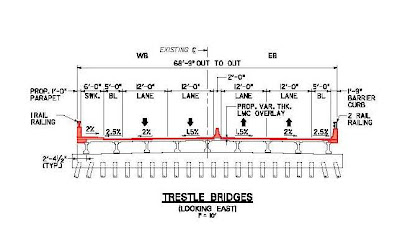 Cross section diagram of the proposed final build of the eastern two trestle bridges.
Note the five foot wide bicycle lanes on each side of the roadway. Source NJDOT
While 13 foot shoulders on the western two bridges is more than adequate for experienced adult cyclists, this is still not a desirable place to ride for novice cyclist nor for children particularly when motor-vehicle traffic is traveling at and in excess of the posted 55mph speed limit. On the eastern two bridges the 5 foot bicycle lanes are grossly inadequate when motor vehicle traffic will be passing within 5 feet or less of a bicyclists left shoulder, again at or in excess of the posted 55mph speed.

Finally, the proposed improvements to both the mainland and LBI approaches to the bridge seem to show little concern for how bicyclists are to traverse these critical sections (see pdf renderings 1 & 2). On both sides the shoulders fade to the curb-line to accommodate high speed exit and on-ramps. Of special concern are the proposed improvements on the mainland. In particular, the eastbound mainland approach for cyclist would require riding in the shoulder for a stretch, crossing a high-speed off-ramp, then riding in a high-speed on-ramp for an undisclosed extended distance. Such lack of consideration for cyclists in these sections is intolerable in a day when well engineered bicycle lanes have been accepted practice for well over a decade. Also, the preliminary renderings for the mainland approach show no pedestrian facilities beyond the sidewalk over the bridge. There are no other sidewalks or crosswalks currently proposed anywhere on the mainland side of the project.

By contrast to the Route 72 proposal, the Route 52 causeway that is currently under construction from Somers Point to Ocean City will accommodate bicyclist and pedestrians with a 10 foot wide multiuse facility that is divided from motor vehicle traffic with a crash proof barricade. That project also gave great consideration to how both bicyclists and pedestrians would reach the bridge on both approaches (see pdf renderings 1 & 2).

A rendering of the planned Rt 52 multiuse walkway/bike path. Source NJDOT
On a bridge of this length (2 miles) persons on foot or on a bicycle persons on foot will required an extended period of time to cross. The current proposal provides little for these persons to escape the constant unnerving presence of high-speed, 55mph traffic. To expect a pedestrian or bicyclist to cross a two mile bridge with little refuge and in places absolute minimal refuge (5 foot bicycle lane) from traffic is not reasonable. Such a task is barely tolerable by the standards of adventurous adults and is without question something that few parents would want to do with children. It is also difficult accept that better bicycle and pedestrian facilities cannot be accommodated when on the western two bridges, automobile traffic will be accommodated with shoulders, (shoulders!) of at least 12 feet in width on both sides for a total of four shoulder lanes totaling 50 feet!

For the reasons I cite above it is my opinion, that while preliminary, the proposed bicycle and pedestrian facilities for the Route 72 Manahawkin Bay Bridge are completely unacceptable, without compromise and should be revisited with an eye to providing bicycle and pedestrian access that most adults would feel is safe for middle-school aged children to traverse. This is particularly important on this project since it will provided the only means by which persons can access Long Beach Island by land. To compensate for the expected discomfort and likely dangers bicyclists and pedestrians will undoubted encounter using the currently proposed improved Route 72 Manahawkin Bay Bridge, bicyclists and pedestrians should be accommodated by a separated facility of at least 10 feet in width like that already being constructed on Route 52.

To help prove my point I would also suggest the NJDOT produce a study looking at the bicycle and pedestrian level of service provided by these preliminary proposals. These results should be then compared to other build proposals for bicycle and pedestrian accommodations that could be feasible within the footprint of the proposed bridge structure footprints, like a separated and protected multi-use lane on the north side of the bridge. I am confident that such an analysis will reveal that much better bicycle and pedestrian alternatives are feasible that will not effect the budget of this proposed project by any reasonable significance.

Finally, it is understood that these are very preliminary proposals and that not all details are finalized. More detail of how exactly pedestrians and cyclists are to be accommodated are likely to come. However, it should be noted that these preliminary plans already show in great detail exactly how all motor-vehicle lanes are expected to be constructed. The proposal also calls for a final constructed project that goes well above and beyond even any future projected motor-vehicle volume needs. There really isn't anything wrong with that until one compares the cursory if not curt nature by which bicycle and pedestrian need are addressed. It does not leave one feeling confident that those needs will be addressed without constant, vigilant monitoring by bicycle and pedestrian advocacy groups. Imagine if motorists felt as compelled to be as attentive, to prevent dangerous roads being built for them.
Email ThisBlogThis!Share to TwitterShare to FacebookShare to Pinterest
Posted by Andrew J. Besold at 10:59 PM