The Delaware River Heritage Trail is a planned trail network that spans the upper tidal section of both sides the Delaware River from the Tacony Palmyra Bridge between Philadelphia and Palmyra to the Calhoun St in Trenton which connects Trenton NJ and Morrisville, PA. 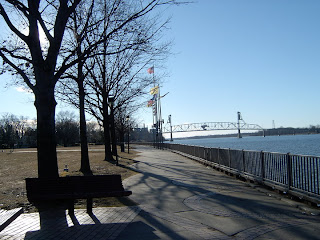 On the Pennsylvania side Planning for the trail is underway and well funded as the trail alignment there will be the same as the Pennsylvania section of the East Coast Greenway.
The New Jersey side of the trail lacks such grass roots sponsorship. Implementation of the trail rests on several agencies and governments, divided between the Delaware and Raritan Canal Commission, Mercer County Parks and Burlington County Traffic Engineering and Burlington County Open Space Planning.

Three small sections of the trail are complete. The Delaware and Raritan Canal from Lalor St to Crosswicks Creek across from Bordentown, The Burlington Waterfront Promenade with a path extension to the Burlington YMCA and Burlington South Train Station and along the RiverLINE alignment in Riverton and Palmyra. Additionally two disconnected sections between Burlington and Bordentown are in final design and may be ready for construction within the next year.

But there is much more to do, with more than a dozen communities involved it will be a heavy lift to keep the momentum going to make sure that this trail is done in the next 5 years. The Bicycle Coalition of Greater Philadelphia has started a Friends of the Delaware River Trail Facebook Group. The group will hopefully be a catalyst for a citizens based movement to assure that the trail remains a priority and fully funded for quick implementation. Trail maintenance and events are some of the ways this group can support the effort. If you are interested in promoting the regional trail project as well as keeping up with trail update then I would ask you to join this Facebook Group.

Friends of the Delaware River Heritage Trail
Email ThisBlogThis!Share to TwitterShare to FacebookShare to Pinterest
Posted by John Boyle at 11:18 AM

Good for local businesses and what a great way to use the RiverLine train too! I hope it happens.