About 40 people attended the press conference on bicycle safety. The event was held in the Ocean City Transportation Center which is the northern terminus of Bicycle Route OC1 which runs along Haven Avenue.

Pam Fischer, director of the Division of Highway Traffic Safety was the main speaker and she went over safety tips for bicyclists and encouraged motorists to share the road and look out for bikes.

The press conference was followed by a bike ride on Haven Avenue, riders got a first hand look at New Jersey's first bicycle boulevard which connects the transportation center to a 1/2 mile rail trail. Kudos to Ocean City. My only critique of the campaign is that we need to continue to encourage people to take up bicycling because it is good for them and good for the environment, and that there is safety in numbers, a motorist is less likely to collide with a person walking and bicycling if more people walk or bicycle. These findings were reported in this 2003 article in Injury Prevention Magazine. 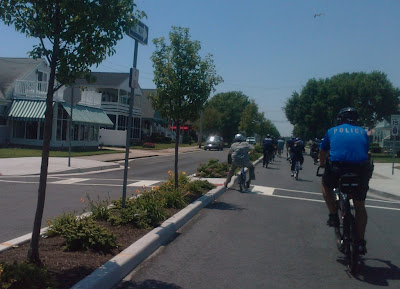 That's pretty cool they had a bike ride after it.