Between 2009 and 2011 49 reportable bike crashes occurred on Route 35 with the majority of them resulting in injuries to the bicyclist. The road width of the state highway varies but for most of the central and southern sections the width of the available shoulders is up to 24 feet in each direction (12 feet on each side of the road). Yet at the well attended public meeting held at the Lavallette Elementary school earlier this week engineering drawings show no bike lanes anywhere on  the 12 mile project.

Send an email to Commissioner Simpson

In conversations with the various project team members responses pertaining to the inclusion of bike lanes ranged from "they will probably go in some places" to "we're talking to the communities" to "there's not enough room", although no one ruled them out. However time is running out, if bike lanes are not included in the construction drawings then they won't be marked. NJDOT's Bicycle and Pedestrian office has recommended bike lanes for sections of Route 35 with available right of way. However this project is not subject to the DOT's Bicycle Pedestrian Office sign off, as it is considered an emergency repair, so the recommendation is just that.

The reconstruction of Route 35 is a litmus test for New Jersey’s Complete Streets policy. There are few, if any, New Jersey state highways that have the same available right of way, volume of bicycle and pedestrian traffic, opportunity for economic impact and increase in pedestrian safety as Route 35 in Ocean County.  If bike lanes are not included in this project, then we have to question the validity, ability and intention of the state to fully implement its Complete Streets policy.

So if you have not written to the DOT then do it now! Your email will go straight to Commissioner Simpson. 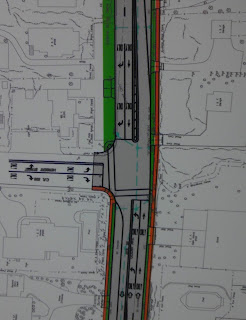 Email ThisBlogThis!Share to TwitterShare to FacebookShare to Pinterest
Posted by John Boyle at 12:27 PM