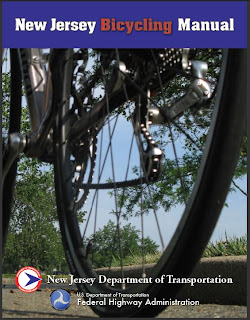 NJDOT has released its long anticipated New Jersey Bicycle Manual.  This manual was produced with the assistance of the New Jersey Bicycle Pedestrian Advisory Committee, Safety Education Sub-Committee with members representing Bike New York, Hohne Consulting, Alan M. Voorhees Transportation Center, New Jersey Department of Transportation and The RBA Group.  This manual is only available on-line as the general policy within state government is to no longer print certain documents as a means to save precious tax payer dollars.

Unlike previous NJ Bicycle Manuals, this one is not written for children only.  It presents the information in clear and concise manner for a general audience with diagrams and text that cover nearly all situations a bicyclist would encounter on the streets and multi-use trails.  Overall this is a well produced document however it does have one major omission.  Beyond that oversight, the manual is excellent and pretty much follows the principals of Smart Cycling as developed by the League of American Bicyclists.  There is even a section at the end talking about pedestrians safety and what bicyclists, motorists and pedestrians themselves can do to keep pedestrians safe.

Topics covered include the following:
The manual does an good job of presenting cycling in a manner that is approachable to the general public.  While there are a few pictures of people riding in spandex and of one really sweet Italian road bike ;), overall most of the pictures show people riding regular bikes in regular clothing.  The language used to explain things is also clear and without unnecessary use or jargon or special terms which is also good for people new to cycling.  That said, there are still some rather advanced cycling techniques and traffic maneuvers discussed and explained, like taking the lane on a narrow roadway along with some group riding etiquette.  As such even persons with quite a bit of cycling experience will be able to glean quite a bit of useful information from the manual.

Unfortunately there is a major omission from this manual and it is inexcusable.  There is absolutely no discussion of how bicyclists and motorists are to use and treat bicycle lanes, shared lane markings (better known as "sharrows") nor is there any talk about bicycle routes.  There are only some pictures of these facilities in last few pages but with no explanation how to use them.  This is such a shame because otherwise this is an excellent document.  The installation of bicycle lanes, bicycle routes and sharrows are well established and nationally accepted standard traffic control devices.  And even though New Jersey is a bit late in accepting these on-road bicycle facilities, all three of these could be found in the state before this manual was released and more are being built around New Jersey everyday.  And trust me, I take no pleasure in giving this fairly harsh criticism as I know, like and greatly respect all that helped produce this manual.  I can only assume that this omission was deliberate for some reason.

Beyond that, any other issues with the manual are rather minor. In a few places the manual seems to be missing some diagrams and pictures that could go a long way in better explaining what's described in the text.  For example some of the more advanced traffic maneuvers are not clearly depicted in some of the diagrams.  In other cases they are not even shown in a diagram at all, like when trying to demonstrate a "Copenhagen Left" also called a Box or Pedestrian Left.

Same with the section on parking and locking a bike.  The text discussing the best practices on this topic is superb and spot on with what I teach people to do, but the photos don't show a properly locked up bike all that well. For example the picture of that sweet looking Italian road bike (hint, hint) is too small to show that there is also a cable securing the front wheel and saddle.  Also the advice about NOT locking bikes to trees is good but only gives half the story.  Not only does locking a bike to tree have the potential to permanently damage the tree but thieves have been known to cut down smaller trees to steal the bike!
Finally, when it comes to photos, I found it odd that with a few exceptions, nobody seems to smiling while on their bikes!

I also found that there could be some confusion in some section of text.  In the "Sharing the Road" chapter, there is a section that talks about a motorists' responsibilities when sharing the road with cyclists but it is not clearly labeled nor defined.  A a big bold clear title like "Motorists' Responsibilities When Sharing The Road With Bicyclists" might have been helpful to clear up any possible confusion.  And on page 46 there is a sectioned title "Blind" and its totally unclear at first that this refers to "Blind Intersections."  Finally the section on the different classes of roadway signs could be explained a little better.

Overall I still consider the manual to be an excellent document and has much to teach bike riders.  Even without a section on bike lanes, routes and sharrows I would still highly recommend to all interested in cycling, beginner to expert. Still, I feel the lack of any discussion on bicycle lanes or "sharrows" is a pretty big oversight and left me disappointed.

If I were a teacher giving it a grade, I'd give it a 88 out of 100 (100 being absolutely perfect), still a B+.  If it had a section on bike lanes, routes and sharrows presented as well as the rest of the manual, I would have given it a 96.
Email ThisBlogThis!Share to TwitterShare to FacebookShare to Pinterest
Posted by Andrew J. Besold at 2:30 AM