I had the good fortune of coming across several good videos today that readers of our blog and all New Jersey bicyclists should see.

The first is a wonderful, *NEW*, 5 minute short about Kerri Martin (WalkBikeJersey's official president BTW) and her Bike Church down in Asbury Park. The new video from Brian Johnson, released earlier this month really gives you an idea of the transformation effect the bicycle and Kerri's efforts at the Bike Church have had on children growing up in an urban environment where kids often face many problems.

The Bike Church from Brian Johnston on Vimeo.

Also is this 2007 production about Kerri and the Bike Church that is pretty much in the same vein as the newer video and is also just around 5 minutes.

Final there is this superb vintage bicycle education video out of the Oakland, California by Progressive Pictures (I kid you not!). It is supposedly from to 1948 but many (comments on YouTube) think its newer, from the 1950's and I tend to agree (look at the cars). I think it's very well done and almost all of the information and lessons given are excellent and still apply today. However, most of the lessons given in the "riding at night" section have been outmoded by advances in technology. There are also some great stunt crashes, some done by children that all managed to walk away with a smile, despite the lack of a helmet! It's geared toward kids but there are adults in the film and the lessons are given in a way that appeals to audiences of all ages.

Anyway I notice a couple of other interesting things that may be of interest to us "livable streets" types. First, did you notice the 15mph speed limit. It is my understanding that they are still considered illegal in most places including New Jersey (DON'T quote me on that). Second are parking space markings on the roadway that are nearly identical to the ones used in the Bay Area today. They are crosses that have a branch that extends out into the traffic lane. These are still in use out in California because (or so I believe) the branch that extends out into the street acts as a guide to cyclists to stay out of the door zone, like that shown below on this street in San Francisco. Oh well. Everything comes around a second time I guess and hopefully for the better. 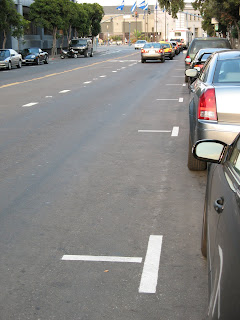 Email ThisBlogThis!Share to TwitterShare to FacebookShare to Pinterest
Posted by Andrew J. Besold at 8:51 PM

THis video is fantastic! Nice job.

Great story as for me. I'd like to read something more concerning this matter. Thnx for giving this info.
Sexy Lady
UK escort

Cool blog you got here.
I'd like to read a bit more about this matter.
Thanx for posting that material.
With best regards Nelya!
Kiev escort girls