For those of you who don't know, Prof. John Pucher is probably the most well known and widely published scholars on bicycle and pedestrian issues in the English language. His specialty is comparative analysis between nations of the beneficial economic impacts of walking and biking (often along with transit). When he is involved in the publishing of a paper on the topic, the entire bike/ped world stops and listens.

And he lives right here! In Jersey no less!

His latest is no exception. Working with four other colleges the last paper is titled, "Walking, Cycling, and Obesity Rates in Europe, North America, and Australia" has recently been published in the Journal of Physical Activity and Health. 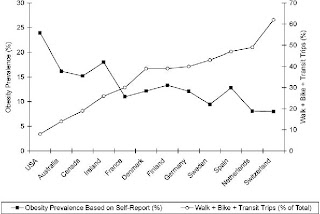 So essentially the more a people walk, bike and take transit to work the less likely they are to be fat. Seems like a simple enough concept but this report is pretty strong evidence that this is indeed the truth.

It's been getting some pretty good nation press too.

Oh and he goes by "Car Free John." It is a name which he really lives up to since he doesn't own a car and walks, bikes and takes transit for nearly all his trips. However, he has been know to mooch a ride off of friends once in a while. Hey! No one's perfect!
Email ThisBlogThis!Share to TwitterShare to FacebookShare to Pinterest
Posted by Andrew J. Besold at 2:20 PM

I got some add-ons for my xtracycle for a present and it came with a mag called Momentum that had an article by John Pucher in it. It looks like maybe he writes for it all the time, but it was pretty exciting to recognize a name.

Plus I also recognized this guy as being from New Jersey.