Last June, WalkBikeJersey broke the story about the initial proposal for Rt 72 Manahawkin Bay Bridge to Long Beach Island having less then desirable bicycle and pedestrian facilities. The NJDOT website for the project still says that the proposed bicycle and pedestrian improvements will include a six foot wide sidewalk and a bicycle lanes that will be as little as 5 feet wide in places.

View Larger Map
However, a video for the project on the same NJDOT website now shows the proposed bridge having a protected pedestrian walkway (multiuse path?) that appears to be nearly the same width as one motor vehicle lane. 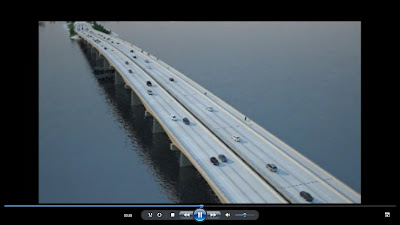 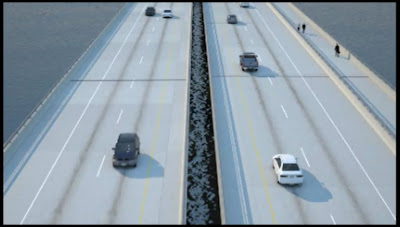 Video screengrabs of the proposed Rt 72 Bridge clearly show a barrier protected
walkway on the main western span. Source: NJDOT / Parsons Brinkerhoff
WalkBikeJersey has been monitoring this project since it will be the first major bridge replacement by NJDOT since it adopted a Complete Streets Policy last year. If the video is to be believed and actually shows a revised proposal for the bike/ped amenities, this is indeed welcomed news and clearly has NJDOT starting 2011 on a welcomed note.

Still, this edition of the video is relatively new as an older version of the video of this project did not clearly show a protected walkway. It also only shows the larger western span (the Manahawkin Bay Bridge is actually a series of 3 bridges) and does not show the eastern 2 spans where bicyclists are proposed to be accommodated by 5 foot wide bicycle lanes. Also not shown are the approaches to the bridge on either side which can make or break the usability of the facility for more cautious non-motorized users.

Stay tuned the WalkBikeJersey for continuing updates on this project.

The RT 72 Manahawkin Bay Bridge video can be seen in its entirety on the NJDOT website here.
Email ThisBlogThis!Share to TwitterShare to FacebookShare to Pinterest
Posted by Andrew J. Besold at 7:37 PM