It shouldn’t come as such a surprise that even Santa looked exceptionally fit. Every couple moments Santa had to lift his big black belt to keep his red pants from coming down due to the lack of a belly. That’s what happens when Santa rides a bike.

The Spirit of Christmas came early to Second Life Bikes in Asbury Park on the Thursday before Christmas, and dozens of local kids were the beneficiaries of some of the best bicycle love found in New Jersey. Bike lights and locks were given to the older children and the younger kids were the lucky recipients of great bikes with plenty of life left in them. All the while everyone was well fed with dozens of pizzas, a six foot sub sandwich and great cookies and snacks. And while Kerri Martin, Second Life’s founder was definitely the master of ceremonies, she was far from the only source of the charity and joy found that day. For this holiday party, Kerri and her band of volunteer elves had some help. 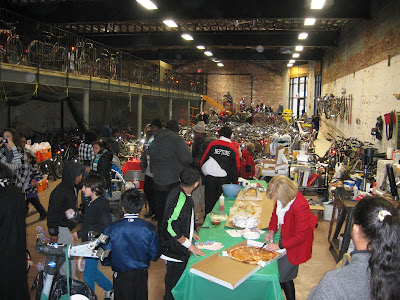 Even from tragedy can come joy.  Back in October of this year Rodd Secrist died in a tragic accident. According to his mother Lori Gaffney, Rodd loved cycling along with helping others, especially children. In lieu of flowers at Rodd’s funeral, his mother asked that donations be given to Second Life Bikes because of the youth program Kerri runs to teach the local kids the joys working on and riding bikes. With the donations Lori received she was able to provide the food and drink for all those in attendance. Along with the food, Lori was able to provide gifts for the older kids in attendance including locks, front and rear bicycle lights and helmets.

However, Second Life Bikes and all those in attendance were doubly blessed this year with tidings of good will. A group of young women called the W Girls, Coastal New Jersey Chapter also stepped up to help out. The W Girls focuses there charity to help disadvantaged women and children and that evening the W Girls provided gift certificates to a local book store and more.

Not to be outdone, Kerri also had a trick up her sleeve to bring the evening to a climatic end. She and her merry band of volunteer elves were able to put together and give away 20+ small children’s bikes to local kids of needy families. She was only able to do this due to the many bicycle donations she receives. And while the adult bicycles tend to sell rather quickly, Kerri had been accruing a rather large surplus of the smaller kid’s bikes (hint, she has many more for sale). All in attendance were smiling ear to ear as many of the young kids joyously received what in many cases were their first bikes.

Overall, the Christmas Party was a rousing success. There was much to celebrate for all involved and all are looking for a great 2011 at Second Life Bikes as Kerri’s (not so) little bicycle operation will be staying in its 21 Main Street location for another year.

For more photos check out the photo album below.  (Unfortunately I didn't get a good picture of Kerri this time around. Sorry.)

Email ThisBlogThis!Share to TwitterShare to FacebookShare to Pinterest
Posted by Andrew J. Besold at 2:46 AM

Children love balance bikes, probably more than anything else. Balance bikes are much safer and more practical than tricycles and training wheels. Children also learn how to concentrate with the help of a balance bike. You should check out the balance bike buying guide for toddler before buying a balance bike for your kid.