In an interview on NJN News on Monday, January 3rd, the Bergen County Prosecutor, John Molinelli is calling the hit-and-run crash that killed Dr. Paul Kudowitz "vehicular homicide." According to the report, Dr. Kudowitz was crossing Broad Avenue at 5:30 on December 24th as he was walking home from a Friday night prayer service at his daughters house for the Jewish sabbath.  Police found parts from the vehicle that hit Dr. Kudowitz and are looking for a mid 1990's Chevrolet Tahoe, Suburban or extended cab truck that is either white or cream in color. 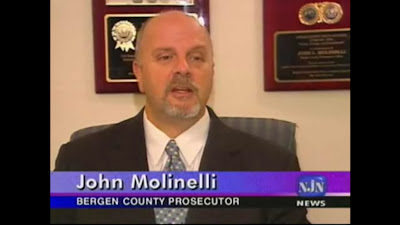 It is interesting to note that the Prosecutor is talking vehicular homicide at this moment without even knowing much about the driver.  Usually the only time this charge is used in a fatal pedestrian or bicycle crash is when the driver is drunk, otherwise impaired or in the act of committing a crime.  The NJN report says that Broad Ave were Dr. Kudowitz was struck and killed, is marked at only 25mph but that drivers routinely speed on this roadway.  This would seem to indicate that the prosecutor may be taking the likely speed of the vehicle into account in considering such a charge (pedestrians hit at 25mph are very likely to survive a crash).  Undoubtedly the driver will also be charged with hit-and-run along with any other charges.

All too often in the past, drivers who speed and kill pedestrians, are usually not even charged with anything or are given a slap on the wrist when they are charged with "failing to yield to a pedestrian," which is a couple of points and a few hundred dollar fine.  This is truly a cheap price to pay for taking a life.  In hit-and-run situations, if there is no other criminality, the driver will usually just be facing the hit-and-run charges with the minor "failing to yield to a pedestrian" charge.  While hit-and-run is a serious crime, it is secondary to the primary offense.  If the driver stops, they usually weren't charged with anything in the past, even if they were speeding.  It seems as if attitudes are changing, at least when pedestrians are rundown by motorists.

To see the NJN News report for yourself follow this link, click on "Monday" and advance to time stamp 14min 15sec.  The link will only be good for a week as there are no longterm online archives for NJN News and there is no way to directly embed the video here.
Email ThisBlogThis!Share to TwitterShare to FacebookShare to Pinterest
Posted by Andrew J. Besold at 5:04 AM