According to an article in The Record newspaper, the Passaic County Planning department will be holding a series of five open house meetings starting next week in an effort to get the public's input about a possible multiuse trail for bicyclists and pedestrians along the old Morris Canal. There will be a meeting in each one of the towns that the canal route runs. Those meetings are as follows: 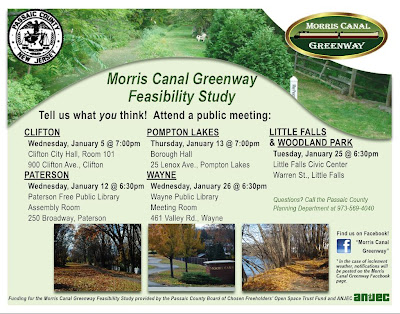 More information about the history of the Morris Canal and the Greenway planning process can be found here and here respectively.
Email ThisBlogThis!Share to TwitterShare to FacebookShare to Pinterest
Posted by Andrew J. Besold at 11:39 PM

This would be terrific! Years ago I would ride from Fair Lawn out to E.C. Peer and Sons on the Morris Canal in Denville for lunch.

The Delaware Canal in PA (western side of Delaware River) is a great model of canal restoration, though flood damage has rendered large sections of the towpath unridable w/o a mountain bike.