Op-Ed: No joy in "Mudville" over Montclair and Princeton gaining BFC status.

Can towns without bike lanes really be bicycle friendly?


The below opinion reflects that only of the author and is not that of others that contribute to WalkBikeJersey.

In years past I've been absolutely ecstatic when some of the first New Jersey towns gained Bicycle Friendly Community (BFC) status.  Previous awardies, West Windsor, Hoboken and Ocean City had all made very tangible bicycle safety improvements to their communities often being the first to to bring well design conventional bike lanes, sharrows and bicycle boulevards to New Jersey.

However when I read that the League of American Bicyclists awarded Bronze Level BFC the other week to both New Jersey candidates, Montclair and Princeton (Borough and/or Township??), I nearly coughed up my morning tea.  While these towns are intrinsically easy to bike around, due primarily to their Pre-War modified grid layout and denser suburban form that they were lucky to inherit, last I checked neither town had a bike lane and in both, proper bicycle parking (that actually meets APBP Bicycle Parking Guidelines, a BFC prerequisite) was in limited supply.  I take no joy in saying this but the awarding of BFC status to both of these towns, rings very hollow to me.

Yes, both towns have active bicycle and pedestrian advocacy groups that have made significant inroads within there local governments.  Bike&Walk Montclair in particular is a standout local advocacy group in New Jersey.  And Montclair made state and national news with its first in New Jersey, Complete Streets Policy.  However Montclair Town Hall has been blocked repeatedly in the past by an obstinate county government that will not allow the town to install bike lanes or traffic calming measures on the main roadways that traverse and bisect their community that are under county control.  While this is no fault of Montclair, and accolades need to lauded upon them for trying, the end result has been that properly engineered bike lanes were never installed in Montclair where they are needed most and would provide the maximum benefit.

Princeton Borough is also notable in that it was the first community in New Jersey to install well designed European / West Coast style traffic calming measures and with its use of conventional Sharrows (Ocean City had previously used its own Sharrow design on its Haven Avenue bicycle boulevard).  The traffic calming, while VERY innovative by New Jersey standards, is mostly in one residential neighborhood at the edge of town. However, the sharrows were not at all well thought out and in some places, like Nassau Street (NJ 27), they were improperly installed by being painted in parking stalls (it is not known whether this problem was corrected even though an official from NJDOT said the improper position of the Sharrows would be corrected).  The harsh reality regarding Princeton's sharrows is that where installed, most cyclists still ride on the sidewalk!  At total fail in my opinion that is doing little to encourage proper cycling in Princeton.
﻿
﻿
By comparison, the City of Philadelphia which has very well design bicycle lanes over most of the city, as much as 200 miles worth by 2007, finally received Bronze BFC Status in 2008 after years of  receiving only "Honorable Mentions."  Like both Montclair and Princeton, Philadelphia too has a grid street network that can aid those wishing to bike around the City.  However it seemed back then that the League of American Bicyclists really wanted to make sure that Philadelphia earned that Bronze BFC Status.  Only in 2012 did Philadelphia move up to Silver Status even though Philly has the highest bicycle commuter mode share out of any large American city.

So the question remains.  Should the League of American Bicyclists have award these communities BFA status even at the modest Bronze level when on the face of these towns, very little infrastructure has been built to aid and encourage cycling?  Would a stranger on a bicycle feel like they are in a community where bicycling is really encouraged?  Do Princeton and Montclair match up to BFCs that earned their Bronze status years ago or even ones that have such status out in the West, where usable, well engineered on-street bicycle amenities, like bike lanes, are commonplace?  Unfortunately, the answer is a big "NO" to all three of these questions.  And unfortunately the awarding of BFC status to these two communities by the League of American Bicyclists does nothing to promote cycling in New Jersey or in the Nation as a whole.

No Bike Infrastructure =  No BFC Status.  Period!  And The League if American Bicyclists should know better.
Email ThisBlogThis!Share to TwitterShare to FacebookShare to Pinterest
Posted by Andrew J. Besold at 7:54 PM 3 comments: 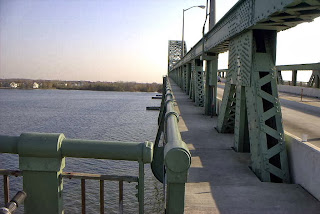 One of the two bike and pedestrian links between Philadelphia and New Jersey has been severed - at least temporarily. The Burlington County Bridge Commission has closed the pedestrian walkway "until further notice" due to damage resulting from a failed bridge opening on October 10th.

The Bridge Commission's website has no information about this closure. We ask the Commission to, at the least, post updates on the walkway's status online or via its text messaging service.

Earlier this year Bicycle Coalition of Greater Philadelphia's highlighted the shortcomings of the region's cross-river transportation system for non-motorized users in the report "Crossover: Bridge Ahead Impassible." The alternative to the 20 minute walk across the bridge (bikes are required to be walked on the bridge) is a 80 - 105 minute three or four vehicle transit ride via SEPTA, PATCO and the RiverLINE that will cost you up to $10. An automobile trip over the bridge costs $2 from NJ to PA only.

This article was republished with permission from the Bicycle Coalition of Greater Philadelphia's Official Blog.
Email ThisBlogThis!Share to TwitterShare to FacebookShare to Pinterest
Posted by John Boyle at 11:15 AM 1 comment: 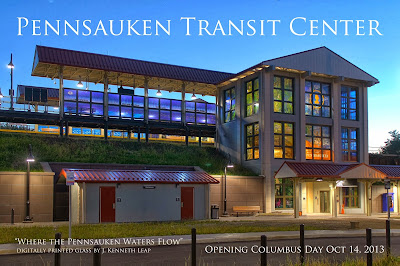 Getting to Atlantic City without transferring to SEPTA or PATCO certainly simplifies trip planning and can save up to a half hour of travel time but the station offers other access and mobility benefits that are less obvious.
Read more »
Email ThisBlogThis!Share to TwitterShare to FacebookShare to Pinterest
Posted by John Boyle at 9:47 AM 2 comments:

According to the Asbury Park Press a section of the Henry Hudson Trail between Atlantic Highlands and Highlands has remained closed since it was badly damaged by Hurricane Sandy last October.  Monmouth County Parks was in the process of cleaning up the trail when the NJ DEP put a halt to the work in January. In addition, the threat of a lawsuit from E Street Band/Conan O'Brien drummer Max Weinberg and an Atlantic Highlands Judge claiming that the construction of the trail has led to erosion of their properties during Superstorm Sandy could still force the closure of the trail.

The article goes on to say that the County has come to an agreement with DEP and that the trail will be reopened in mid-November. Thanks go out to trail advocates in Monmouth County who kept the pressure on to make sure that this valuable resource is once again open to the public.

The Jersey Shore's most bike friendly resort town continues to move forward, according to an August 18th article in the Ocean City Patch. Three projects on the short term improvements list include:

Email ThisBlogThis!Share to TwitterShare to FacebookShare to Pinterest
Posted by John Boyle at 8:29 AM 6 comments: