Walt Disney World - The Jekyll and Hyde of Complete Streets

How many of you have been to to Walt Disney World? Did you rent or bring your bike? Probably not. An enormous transport system of monorails, buses and boats will get you around the sprawling complex but don't count on walking or biking. 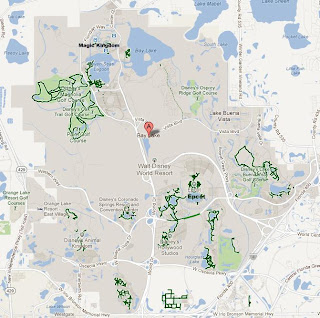 The Google Maps team has brought out much of the Walt Disney World's disconnected walking and biking paths into the light.What's interesting is that many of the resort areas offer bike rentals for use on their internal path networks.
Yet there is no grand loop to connect the numerous resorts and theme parks. I wonder if visitors would arrive less "grumpy" if they able to stretch their legs instead of paying $15 for parking, hopping on a tram and waiting a half hour to get on the monorail.

Celebration "The town that Disney built" has a traditional neighborhood center that is a welcome relief from Orlando's endless sprawl. Wikipedia notes that the locals often use bikes or carts to get around town but 91% of them drive to work.

Much of the internal road network looks like World Drive, interstate like highways without shoulders or sidepaths. Disney should direct some of their "Imagineers" to make this corridor (and its theme parks) accessible to all. Note the super-wide right of way that is already maintained as a manicured lawn.

That is not to say that there are exceptions, Fort Wilderness Campground has internal trails and encourages guests to get around on bicycle. The main path goes to the Fort Wilderness Lodge which is a five minute bus ride from the Magic Kingdom entry gate.

The Disney Boardwalk resort area which idealizes the Jersey Shore during the early 20th Century is connected to Epcot International Gateway and Disney Hollywood Studios via a network of multi-use paths (boardwalk, wide sidewalk and asphalt). The travel time between the two parks on bicycle is 5 to 10 minutes (depending on foot traffic), even walking is competitive with the 30+ minute ferry ride. The problem - no bike racks at either end and I suspect that bikes attached to to anything are subject to confiscation. Ask a cast member to see they if can help you out at the gate. "Walkway from Disney MGM Studios to the Walt Disney World Swan and Dolphin" by bigbrian-nc, on Flickr

On a larger scale Central Florida has some of the best maintained long distance paved trails in the Country. The 32 mile West Orange/South Lake Trail system's Winter Garden Station trailhead is about 33 miles from Downtown Disney and the trail is accessible via several Lynx bus routes. Bike rentals are available in Winter Garden. This great video from the Edgewater Hotel gives a nice preview of the trail.

Investing in a connected attractive multi-use trail network would payoff big for WDW which has a parking capacity for 46,000 cars and a fleet of 300 buses. That's a lot of CO2 no matter how green the resort claims to be.

Email ThisBlogThis!Share to TwitterShare to FacebookShare to Pinterest
Posted by John Boyle at 9:45 AM

Thanks for pointing this out. I recently tried to bike WDW and was completely shocked by the lack of bicycle trails. Before the trip I emailed them for their main bicycle map. I was told to don't worry about bicycling and to use the main transit system.

Another thing to note about WDW resorts is the lack of bicycle racks to lock up too. When I asked security about locking to fences I was told my bike would be cut off. Bummer. Great post!