Much of the following is taken from a recent post from the Bicycle Coalition of Greater Philadelphia's, Bicycle News. 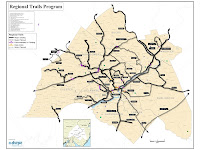 In late October, the Delaware Valley Region Planning Commission awarded $5.2 million through Phase I of its Regional Trails Program.  This grant program is funded by $10 Million from the William Penn Foundation, and provided money to eighteen projects around the 9 county Delaware Valley region.  However, of those eighteen projects, only two are in New Jersey and account for only $373,000 of the $5.2 million awarded, less than 7.2% of the grant money available.  While this money is available equally to counties and municipalities in both states, the massive bias towards Pennsylvania is because New Jersey communities are simply not applying for the grants.  According to John Boyle of the Bicycle Coalition of Greater Philadelphia, "New Jersey communities are failing to come forward and apply for money to build trails in the past few years.  Kudos to Camden County/Coopers Ferry Partnership and Mercer County/Friends of the Lawrence Hopewell Trail for taking the opportunity to expand their trail networks."

These initiatives include both trail design and trail construction in New Jersey and Pennsylvania. They extend existing trails, including the Schuylkill River Trail in Phoenixville, the Chester Valley Trail near Exton, and the East Coast Greenway in Tullytown. They connect the existing and planned elements of the regional trail network to neighborhoods through projects like the Baldwin's Run Tributary Trail in Camden and the Lawrence-Hopewell Trail in Lawrence. Finally, these grants support several landmark projects, including the Manayunk Bridge Trail that will provide a cross-river connection between Philadelphia and Lower Merion Township and serve as a destination for bikers and walkers from across the region.

The awards to trail projects include:

In addition, the DVRPC Board today approved $125,000 in funding for Camden County’s Kaighn’s Avenue to Route 130 Connector Trail. This project was one of four “early action” projects originally approved for $50,000 of funding in July 2011. The grant has since been revised to $125,000. The other three early action projects were:
In mid-December, DVRPC received applications for Phase II of the program, for projects that were seeking planning and feasibility funding. Those awards are expected to be announced in early 2012.
Email ThisBlogThis!Share to TwitterShare to FacebookShare to Pinterest
Posted by Andrew J. Besold at 12:50 AM

In total, 3 grants amounting to $498,000 were made to New Jersey communities as part of the $5.2 million Phase I grant program. One of the 3 projects was "early action" and so was awarded at DVRPC's July Board meeting.

Thanks for the clarification but this still means that New Jersey communities are only receiving around 9% of the money that DVRPC is making available.

Why are New Jersey communities leaving so much money on the table for their PA neighbors take advantage of?!?!