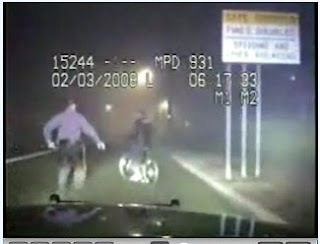 From the Courier Post - Sheila Stevenson was arrested on Feb. 3, 2008, on the 500 block of North 2nd Street in Millville, NJ for riding on the sidewalk. Stevenson's arrest, captured on dashcam footage from the officers Police car, is at the heart of a lawsuit filed by the woman against Millville Police officers.

The officer made a statement at the end of the story that included this line: "She was charged with a city ordinance violation for riding a bicycle on a sidewalk in the arts district, a traffic summons for failure to keep right on a bicycle..."
Email ThisBlogThis!Share to TwitterShare to FacebookShare to Pinterest
Posted by John Boyle at 9:17 AM