What's the difference between Assault by Auto and Careless Driving?

If I told you that a driver got charged with Careless Driving after killing a cyclist and another was charged with Assault by Auto for hitting, but not killing a pedestrian you might think I had my facts mixed up. Unfortunately that is not the case.

The (Bergen) Record reported on December 6th about a case where a plumber was unloading his truck and was seriously injured after he was hit by a driver who then fled the scene. The surprisingly, all too rare but seemingly appropriate charge of Assault by Auto was issued against that driver.

In the more tragic case of the cyclists killed by a driver, it currently seems that justice may be going astray. The Record this time twice reported the case of Camille Savoy who latter died and was memorialized by fellow cyclists. In this case it seems that Savoy, an experienced and cautious cyclists, was hit and killed by a driver as he road close to the white line that demarcates the shoulder in a manner many are calling totally legal. How this only could only be Careless Driving is a question many want answered (read the extensive coverage, including photos of the scene, read the last 10 posts on this very good blog). 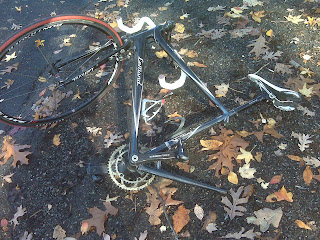 The remains of Savoy's bike as photographed by Rob Glick on Benepe's Bike Blog.
This is again another good reason for a "Safe Passing Law" preferably one that requires motorists to pass cyclists by "half the width of the lane."
Email ThisBlogThis!Share to TwitterShare to FacebookShare to Pinterest
Posted by Andrew J. Besold at 10:18 PM

WoW shares many wow gold of its features with previously launched games. Essentially, you battle with wow gold cheap monsters and traverse the countryside, by yourself or as a buy cheap wow gold team, find challenging tasks, and go on to higher aoc gold levels as you gain skill and experience. In the course of your journey, you will be gaining new powers that are increased as your skill rating goes up. All the same, in terms of its features and quality, that is a ture stroy for this.WoW is far ahead of all other games of the genre the wow power leveling game undoubtedly is in a league of its own and cheapest wow gold playing it is another experience altogether.

Even though WoW is a Cheap Wow Gold rather complicated game, the controls and interface are done in warhammer gold such a way that you don't feel the complexity. A good feature of the game is that it buy wow items does not put off people with lengthy manuals. The instructions bygamer cannot be simpler and the pop up tips can help you start playing the game World Of Warcraft Gold immediately. If on the other hand, you need a detailed manual, the instructions are there for you to access. Buy wow gold in this site,good for you, BUY WOW GOLD.