At the New Brunswick City Council meeting two weeks ago the Council decided to postpone their discussion of the proposed bicycle sidewalk ban ordinance till their next meeting which will be tomorrow November 16th at 6:30pm.  At the November 2nd meeting photocopies of the ordinance were presented to all attendees (see photos below).  As written, the draft ordinance would ban all cyclists from most city sidewalks regardless of age.  There was some consideration to allow cyclists to use "multi-use sidewalks" on NJ Route 18 and on several other roadways.  However in addition to the sidewalk ban, Section III, Paragraph B of the draft ordinance would ban cyclist from riding two abreast regardless if motor traffic is obstructed or not.  This is part is most disturbing because New Jersey Statute 39:4-14.2. Keeping to right; exceptions; single file grants cyclists the right to "travel no more than two abreast when traffic is not impeded."

During the public comment period at the end of the November 2nd council meeting, I addressed my concerns with the ordinance as drafted and provided some historical background and the state of cycling in 1893 when the original city ordinance banning cycling on the sidewalks was written.  From there I told the council that I was glad to see that the draft ordinance considered the needs of cyclists who use the sidewalks on Rt 18 and several other locations.  I suggested that the sidewalk ban not apply to children under the age of 14 and that it should also NOT apply to to sidewalks that are on Rutgers University property that are also not immediately adjacent to city roadways (ie. in quads and on campus between other buildings).  I did suggested to the council that a sidewalk bicycle ban was very appropriate, regardless of the age of the cyclist, in the central business district and in other select sections of the city that see constant pedestrian traffic day and night.  However I felt that the sidewalk ban was totally unnecessary on most residential streets elsewhere in New Brunswick.  I also addressed the issue of the draft ordinance's complete ban on riding two abreast which restricts the right to do so granted to cyclists in New Jersey Statute 39:4-14.2.   I wondered aloud if the city could restrict a right granted by the state and let them know that my understanding was that they could not.

Finally, I asked the council to consider why cyclists feel the need to ride on the sidewalks in the city in the first place.  Such behavior is typical when there is a dangerous on-street bicycling environment, or at least a perception that the street is a dangerous place to ride.  I told the New Brunswick City Council that the best way to solve the problem of cyclists riding on the sidewalks was to provide cyclists a place to ride in the street.  I was blunt to the Mayor and Council that New Brunswick was way behind peer university towns all across the nation that have done much, much more to accommodate cyclists.

In closing I told the Council that they could call on my expert opinion on this and other future bicycle issues in New Brunswick.  I also reminded them that some of the worlds leading experts regarding bicycle and pedestrian issues are literally a stones throw away from City Hall at the Bloustein School, namely Prof. John Pucher and the staff at the New Jersey Bicycle and Pedestrian Resource Center which is part of the Voorhees Transportation Center.

Photos of the draft New Brunswick City Ordinance that would ban all cyclists from city sidewalks are below.  Click on each and enlarged to read each page. 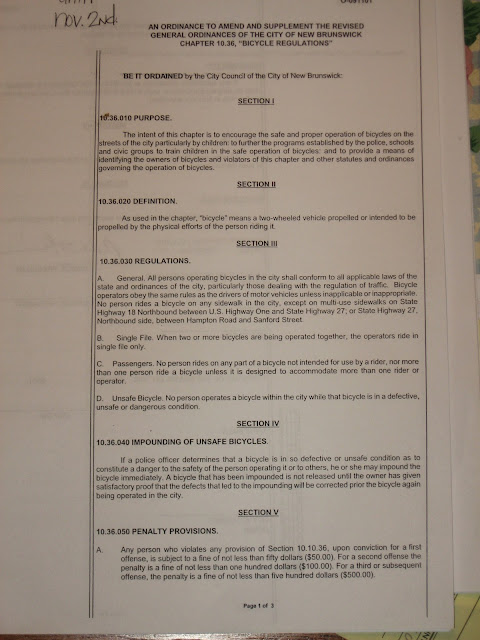 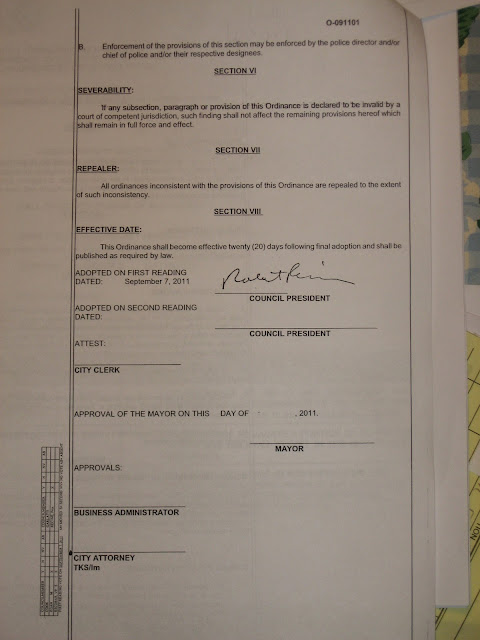 Email ThisBlogThis!Share to TwitterShare to FacebookShare to Pinterest
Posted by Andrew J. Besold at 11:19 PM

Hey, thats a nice topic, thanks! I was looking for this information like a few days and finally, here it is. You're awesome.
I love cycling and doing it everyday. I've used to ride a regular bike, but now I've switched to an electric bikes, so now, I'm searching everything about it. Here are the links of my profiles plus the list of useful links I've found:
https://www.shopswell.com/convert-your-bicycle-to-a-diy-electric-bike-7e94b635-95b8-4e02-bfb7-8a67d57245ae
https://www.infinix.club/forum/823/2251076
https://poptype.co/jarrod-waddell/all-ages-can-ride-electric-pocket-bikes
https://www.minds.com/jennifermartinez/blog/why-electric-pocket-bikes-aren-t-meant-for-the-streets-1079416599499476992
https://www.thebalibible.com/articles/7-best-sports-to-lose-weight-in-a-short-time
https://www.ko-fi.com/post/The-Thrill-of-Electric-Pocket-Bikes-U7U21GM64
https://raddle.me/f/random/107319/why-would-anyone-want-an-electric-pocket-bike-there-are-tons